The seventh edition of the OFFF festival presents itself with a statement for renovation. And so it goes, the rich media starts to be mature and so has been OFFF as well. Yes! in my opinion OFFF offered the most solid and consolidated identity so far. Technical problems have been left aside, tickets have been sold out and the organization of the event has been almost perfect. 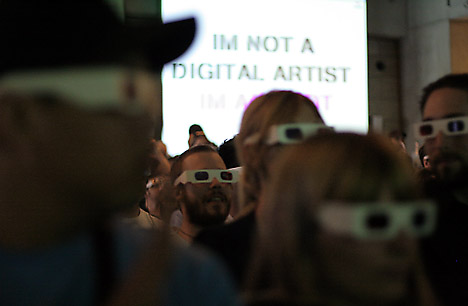 The 2007 edition of the festival also offered a special hour-by-hour coverage courtesy of Nice To Meet You for the very first time. Oh, and as usual, the atmosphere at the CCCB in Barcelona was fantastic.

OFFF also achieved to have John Maeda on stage, something that the event’s organization staff has been trying in past occasions very hard. So, congratulations OFFF, and thanks for making this amazing event possible once again!

But not everything was so perfect though. In fact, I would like to mention that the program booklets are hardly surviving a full day without loosing a page, as well as to mention the problems with the internet access suffered by a few speakers 🙁

The festival is structured as it used to be during last editions: “Roots” – a big conference hall and heart of the festival, “OpenRoom” – offering alternative conferences and performances from emerging local artists, “ShowPlace” – the exhibition space, “Cinexin” – a small cinema displaying motion graphics and the film festival selected pieces, “Loopita” – a space dedicated to DJ and music performances, “Mercadillo” – the shopping area and the lovely bar.

As we get our passes we first enjoy ourselves with the great atmosphere outside in the patio, where the bar, the shopping stands and the DJ stage are located. Great! These areas are accessible to anybody since no accreditation is required.

The festival is going to have a very special opening act. Stefan Sagmeister and Hillman Curtis! Never before, OFFF had such big names right in the opening act, so we go early enough down to the fresh conference hall which looks already pretty full.

The OFFF staff introduces briefly the current edition and welcomes everybody. Unfortunately, Stefan Sagmeister couldn’t make it, but we can see him speaking in a documentary filmed at his studios in New York.

After the video, Hillman Curtis starts with his presentation. He talks shortly about his past projects and background doing Flash websites, but he is on stage to talk about his recent film projects and video experimentation.

His first video experiment is a video portrait inspired by great portrait photographers such as Richard Avedon. Hillman places the video camera in front of the subject and keeps filming for a while; enough time to appreciate eye-blinking and tiny facial expression changes. Hillman tells to the audience that he is taking one portrait to absolutely anybody visiting his studio.

He talks about his latest film projects, a set of documentary and short films done following 3 basic rules:

We have the chance to see two of his pieces, a documentary about the great video maker Mark Romanek and a short film called soldiers.