The first thing you experience when arrived at Galleria d’Arte Moderna e Conteporanea to visit the show “Optical Sound” is a sound indeed: Jordan Wolfson, a young American born artist living in New York and Berlin, has mounted hidden speakers diffusing crow calls in the museum’s large courtyard. This sound piece, already used at the Whitney Biennal in 2006, is said to have the effect of repelling smaller birds and inviting other crows to arrive from the surroundings. 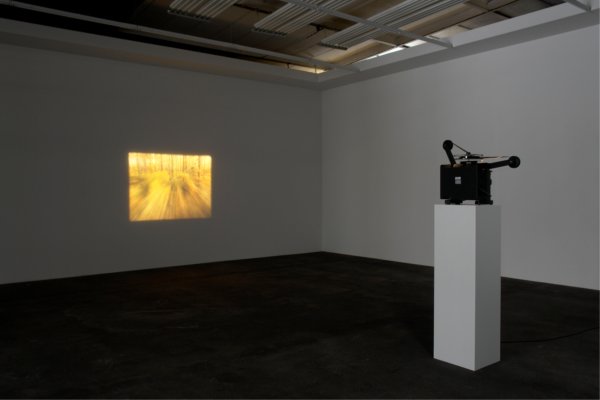 Jordan Wolfson, Forest from Above in Reverse, 2007

The first in-door work shown here is “Forest from Above in Reverse”: a soundless 16mm film in which the camera moves backwards and slowly through a mildly lit forest view from a point of view that largely exceeds human’s average height. 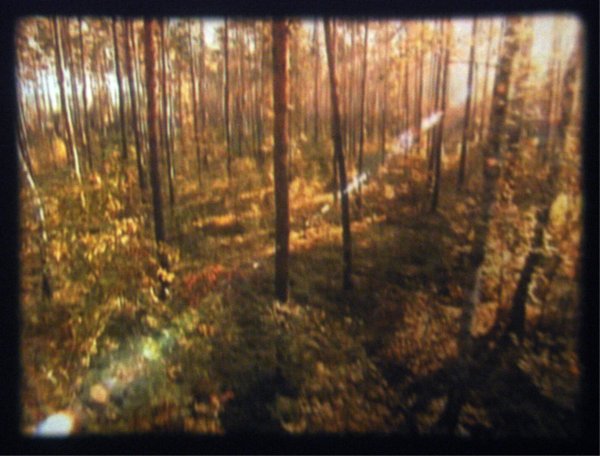 Jordan Wolfson, Forest from Above in Reverse, 2007

The artist had previously explained that the forest chosen as a location is located near the town of Marceline in Missouri where Walt Disney have witnessed a rape, aged 13. Based on a very minimal filming process, this works gracefully conjures the calm of a naturalistic documentary and the vague distress of thriller flicks in equal measure: the familiarity with similar scenes from film and TV, leaves the spectator waiting in vain for something to happen and interrupt the beautiful flow of images.

“Landscape for Fire” is a digital video produced by the museum and presented solely here and it’s a remake of the film of the same name realised by the British artist Anthony McCall in 1972: it portrays men, dressed in work clothes, walking around a wide, empty field lighting up fires that build ever changing geometrical configurations of light. In comparison with the original film, Wolfson has added a more contemporary pop sensibility through the editing and sound recording techniques, realising a piece of work that himself defines a “cover version” (as in rock music) of the original performance / land art document.

In the intention of the artist, this tribute to the McCall’s piece re-invents the work and he hopes that, in the future, someone else will create a new “cover” of his version of the work so that this renewal process can continue.

An elusive but definitely rewarding show from one of the world’s most interesting young artist.