Two new projects from the Santiago Sierra: “The Anarchists” (Los Anarquistas) is based on a performance that the Spanish artist had realised in Rome with eight militant anarchists hired to listen to the traditional Christmas mass celebrated by the Pope and “The Purchase of a Prize” (Adquisicion de un premio), in which Sierra has acquired the Leone D’Oro prize originally awarded to the Guatemalan artist Regina Jose Galindo with the intention of reselling it for an higher price. 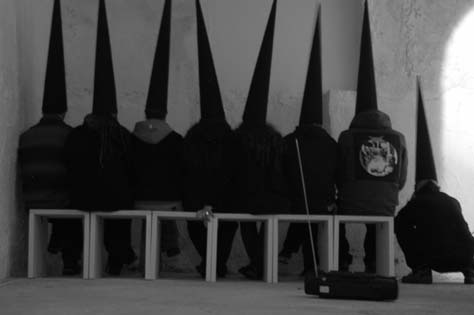 A video, a picture, and an installation of stools and black high hats are the public traces of the performance, originally occurred in the presence of a very restricted audience. The video displays the eight persons from behind, listening to the mass while facing a blank wall: it recalls the punishment of rebellious students compelled to freshen up an official truth they failed to memorize at first. As most of the artist’s recent work, “The Anarchists” deals with the issue of capitalism and with the structure of labour market highlighting its surreal and obscene aspects within formalised practices that allude to the free market’s work-for-money exchange but with no socially recognizable value or purpose. 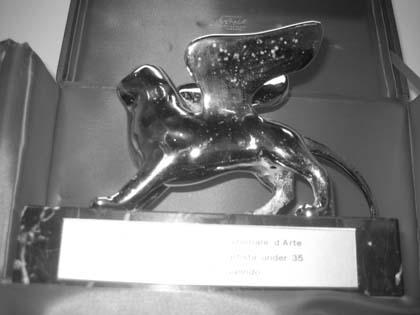 Santiago Sierra, The Purchase of a Prize, 2007

In the second work the symbolic charge of the “Leone d’Oro” is translated in an added value for a commercial transaction. A value that inevitably will rise, as the object becomes part of the Santiago Sierra’s work: a short circuit that involves the self-legitimisation of the art field and the disparities between Western and developing countries.