Aiming to discover unknown talented creators and to provide an opportunity to show their works, “DOTMOV” is a digital film festival SHIFTorganizes, which has been held during the whole month of November every year since its fist festival in 2003. Calling for experimental film works from all over the world, screening winning works selected by SHIFT and guest judges, and having many related events during the term, this annual film festival showed a new dimension again in 2006. The venues where DOTMOV works were simultaneously screened were SOSO in Sapporo, Sendai Mediatheque in Sendai, and digmeout in Osaka. And SOSO had the busiest event month this year again, with the related audio&visual events DOTMOV featured. 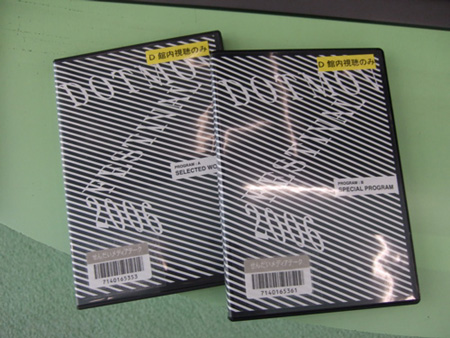 There were 267 entries from 27 countries for the public subscription started on July. It is well said in all other genres that the progress and diffusion of digital techniques make creators easy to bring what they like to express, and there is no exception in the whole quality of film works gathered in DOTMOV. The number of great works is increasing year by year. However, the works we could find splendid were based on the splendid idea, not only depending on techniques; a video collage of timeline “New Me” (Aleksandra Domanovic), a suggestion of dimensionality using a unique character “2D Slave” and an examination of the relation between foreground, background, framing, cropping and our choice of seeing “Taichi ‘In'” (Jacky Lochinghang), a play on the building blocks of all life on earth “Aminoassets” (Zeitaguised), a new animation with picturesque reference “Giocattoli Futuristi” (Claudio Casteili), and a hidden world in everyday objects “Futures” (Robert Seidei), etc.

Including the above titles, total 24 works were selected by guest judges, world top creators in digital film or design field who are also familiar in the past DOTMOVs; The Designers Republic, Motion Theory, Yoshi Sodeoka/c505, Jiro Ohashi (SAL magazine), Sugercube, and Fork. Moreover, a unique compilation of one minute slow motion videos “SLOMO VIDEO“, “Motion Texture DVD” by a creative production WOW, an exchange program with “New Media Festival in Seoul“, and a special program from a Sapporo front-line exhibition of contemporary art “FIX MIX MAX!” were also screened as a special program. Also, SOSO and sendai mediatheque exhibited an interactive work “Code“. The 24 selected works also can be seen online.