“dorkbot“?, What’s that? I hit on that question. I’d never seen it, so that’s quite a natural…however, regardless of it, that question got bigger while I couldn’t catch the detail if I visited Web site of it. As information, I could imagine that it was “a group of those who performs something interesting with electricity” and that those whom I knew a little joined it. 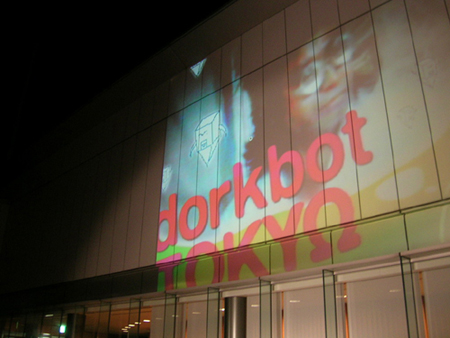 The event had already been held 4times and the 5th was at The National Museum of Emerging Science and Innovation. The start was after closing hour and the visitors had to enter not through a front door, but through side door. There was air of secrecy from the beginning. The concern “Is this the true entrance?” did I eliminate when I found those who would head for it.

However, the situation drastically changed once I saw the event site. The site was a court of a roof of the building. It was cloudy that day, but I could imagine vast, starry sky. There was a projector, lighting, sound system and food stands. There gathered audience and there was atmosphere of expectation that something special would happen though the space was a roof of the building on an average day. The dorkbot was performed at this extraordinary space, inside and outside at the same time. 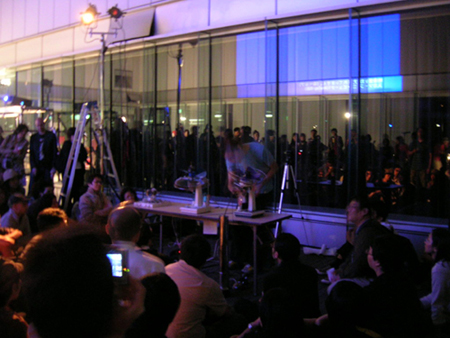 A coordinator Kensuke Sembo, who is a member of the art unit Exonemo, briefly experienced what was “something interesting with electricity”. Digital representation itself was good enough, but electric representation coupled with analog part was also interesting. It was the dorkbot that functioned as a place for representation by those who made pieces from strong seeking like “Radio Life”, a magazine for radio maniacs, I heard. 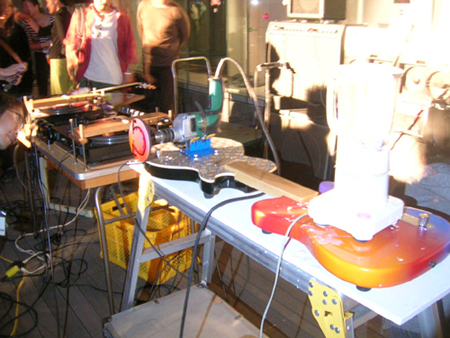 Muneteru Ujino did a live performance, which wasn’t simply categorized as a sound sculpture, with “Rotators”. Rotators is an original equipment, which doesn’t only exist as an instrument that enable to play music made by rebuilding various electronic products, turn table, guitar amp and so on, but also comes into existence as a piece.

I heard that Rotators wholly consisted of analog equipment and there wasn’t digital control at all. It means that the machines in front of us make raw sound and repeated sound unique to machine makes overlap beats like techno music.