This month’s SHIFT cover was designed by Hudson-Powell, a London based creative studio that focuses on the dual development of concept and medium. They produce work that uses the medium as a tool to expand rather than simply present the concept of a project. On this October and November, they will have their first exhibitions in Japan, at SOSO in Sapporo. 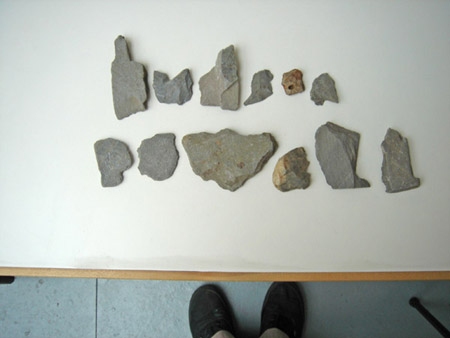 We are Luke and Jody two brothers that create work together within the broad field of graphic design.

We’ve pushed one another creatively since we were kids, and after leaving college, we regularly crossed each others paths on projects. So after co-directing a music promo for PJ Harvey in mid 04, it became clear we should start work together more permanently.

What is your favorite activity field?

You have to look at every project differently, each time using different mediums to communicate the ideas and needs of the brief. We’ve been doing installation, film, print, interactive work, drawing, painting, etc over the last year. It’s an approach that appears to work well, and allows us a broader language with which to communicate a project.

What are the main sources of your inspiration?

We both grew up in the south-west of England, in the countryside, so nature has always been a great inspiration. But generally you don’t know what will inspire you from one day to the next, a conversation, some music, an experience. It may sound vague, but inspiration for us often comes from just keeping our eyes and ears open.

What does it take to run a successful studio?

Hudson-Powell share a studio with friends in London, collectively the group is called “Hello Studio”. We often work with each other on projects, so there’s always lots of activity and communication making the space constantly lively. The Hudson-Powell attitude reflects this, it’s about always being exited with new ideas. Work stays interesting when you are continually motivated to try stuff out.

What is important when you create a corporate Identity?

When doing any design it is important to understand the needs of what you are trying to communicate or visualize. We work with the idea of an identity being an adaptive and dynamic system, rather than a singular or dead end solution. This doesn’t have to mean fast moving video graphics, but rather through different mediums, telling varied and easily understood messages. Technology always influences communication, yet a lot of current visual communication does not fully utilise its medium.

Many corporate identity are very static (just one logo, one colour, one font), what you think of flexibility / dynamic in corporate design?

The concept of dynamic identities is a really interesting one. Scalability and adaptation are key factors in creating a system that can actually work. As an identity is developed you constantly need to ask what is it communicating to you, and whether the medium’s being used to make and display it are adding to this communication.

We approach a music video or video graphics in exactly the same way we would a print or web project. Ideas followed by visual experimentation etc, but the one big difference with video is that you get far fewer “undo’s”, re-filming isn’t always possible and changes can take a long time when your working with heavy files. You need to have absolute confidence in your idea.