Konono No.1 returned to New York to play at SOB’s (Sounds of Brazil) on a hot, humid Monday night. They had given a free concert the day before in Central Park, so instead of two shows they played one – we thought we were right on time for the 8.00pm early show, but had to wait and hour and a half for the re-scheduled event. No matter, we passed the time drinking Mojitos and enjoying the South American cuisine. The Brazilian Pasteis appetizer is a must, hot beef pastries served with a fiery-hot dipping sauce. 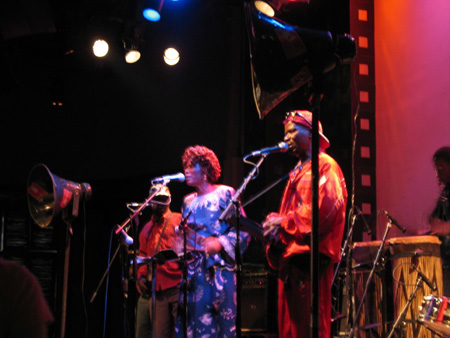 By the time the band arrived on stage a good-sized crowd had gathered, ready to dance. Konono plays traditional songs from their native Congo on thumb pianos, hooked up to pickups and pumped through megaphones. 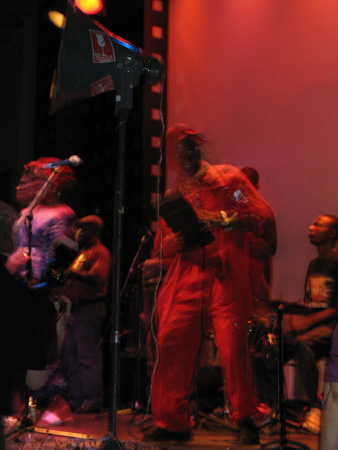 The idea to use electronics first came to the band in order to amplify their sound in the loud streets of Kinshasa, where they are based. Lacking resources, the band’ s founder fashioned a makeshift system from parts found in the junkyard. The low-quality electronics distort the sound of the instruments and vocals, resulting in an amazing mix of rhythm and noise.

They played a two-hour set, non-stop. Their energy was contagious, no one in the audience could help dancing or tapping their feet. One of the band members, dressed head-to-toe in a bright red tracksuit, clearly revelled in the performance, a permanent smile on his face. I can still hear the repetitive, trance-like beats if I close my eyes. You can get a taste of this throbbing Congolese music on their 2005 full-length CD, Congotronics.