Room 2 was fantastic. It somehow gave the viewers a sense of alternative realities, veering from the transformer-type, sci-fi work from The Boghe a bleak landscape of black & white speakers & buildings from Morcky. 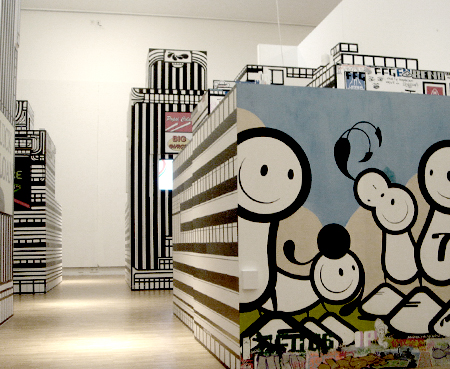 There was the miniaturized NYC metropolitan world of the London Police, with accompanying sounds of the streets & miniaturized graf, the industrial/video game inspired paintings & 3D pieces of Super A… Genius! And finally to the thought-provoking work of Laser 3.14, who showed some unbelievably disturbing images, of a decaying Marilyn Monroe & a smoking Twin Towers. 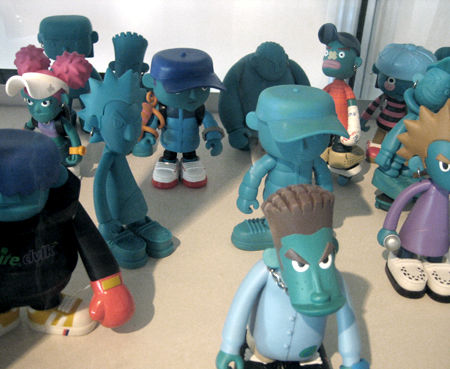 Other highlights of the show are the German documentary on street art, and another collaborative piece between rooms 1 & 2. Finally in the basement, there was an exhibition of designer toys, the most notable being from Michael Lau & Futura.

The show certainly lived up to it’s intention to explore the tension between private & public spaces, as at times it felt as if the work was there for the sophisticated & mature ‘gallery-going’ public maybe to the alienation of the graffiti public. It’s always strange to be in these spaces, seeing work that would normally be adorning buildings, in the grit & grime of everyday reality, now in a serene & sterile location.

That said there’s no taking away from the great variety & creativity of work shown at the GEM. The show is on until the 8th October 2006. Dutch-based street art & urban painting, is in good creative hands. I just hope that if you’re in the Netherlands, that you can find it!!