Back at the stage hall one could enjoy Circlesquare, that is to say, Jeremy Shaw combining his visual art with music. The result was a concert of charged athmosphere, featuring electronic rhythm, punk influences and visuals. 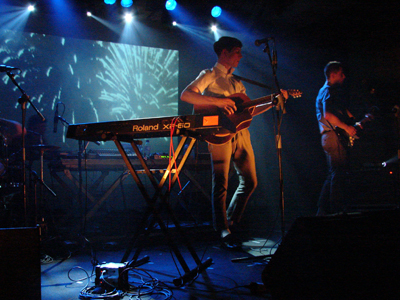 The big open air stage Sonar Village was getting filled early by people filing in to see Pole & Band at 7:30, and Pole kept their promise. They made us all dance with Zeitblom on the base, Hanno Leichtmann on the drums and Stefan Betke on the computer. A very satisfying concert that put us in the right party spirits for the night coming up. 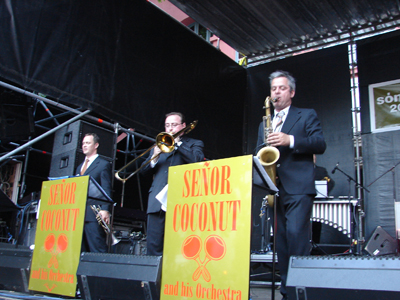 Finally the public became what they were waiting for for a long time, and it was Sr. Coconut’s turn to set an end to the spectacle of the day shows on Friday. He played together with his orchester directed by the Venezuelan singer Argen_s Brito.

At 9:00 in the night and with a luxurous band, percussion, strings and Sr. Coconut (Uwe Schmidt), we danced to his already mithical salsa and merengue versions of songs by the Germans Kraftwerk like we are robots or Tour de France. Moreover, Sr. Coconut presented his new disc The Yellow Fever!, with which he pays his tribute to The Yellow Magic Orchestra, creating new versions of their music.

Sr. Coconut was a great final for the day concerts of this Friday at Sonar. The thing left to do now was go to get something to eat, take a shower and get ready for the night performances…