From June 13th until July 2nd, in the middle of rainy season, “Ryuta Iida Exhibition” was held in the Gallery (g). The work of Iida, in which he focuses single-mindedly on cutting books with a paper cutter, has won the grand prize at the 22nd Hitotsubo Exhibition Competition. He is the talk of the town, and everybody is saying, “He is something.” Included in this exhibition were book-sculptures from the “Tenants” exhibition at Graf in Osaka, as well as artworks in which letters are cut out of one sheet of paper. These in the neat, dimmed space brought in his unique view of the world. 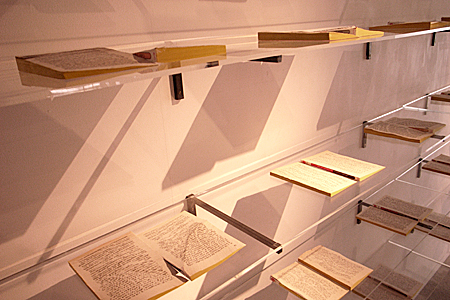 (g) is managed by a design firm called “gooddesigncompany” and is a gallery built within the office. (“Sort of like a gallery,” they say.) The gallery curates mainly young artists like Mitsuru Koga and Naoki Honjo famous for their unique perspective and high quality of work. Artworks are comparably affordable in this gallery, and those elements together make young people feel more in touch with art in this space. 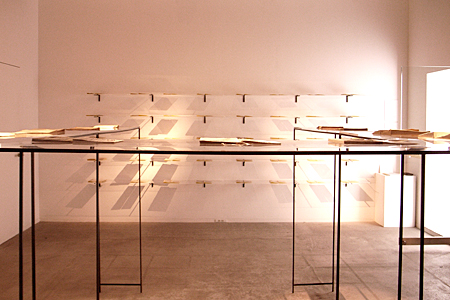 Like the head of the office, Manabu Mizuno, Iida is only 24 years old and already famous for his rare talent. He studied sculpture in college, and his work has been introduced at various exhibitions – for example in a solo exhibition at Guardian Garden or in the group exhibition at Aoyama WALL. Since his family runs an iron factory, he was capable of making all the fixture and furniture in the exhibition himself. The glass shelf in the center of the room was positioned at a certain height so that you see the cover of the book only when you bend down slightly. This drew a fine movement in such a minimal space.