I wanna go somewhere! holiday! traveling! But no money no time no one to go with. If you feel like it, you should definitely go to this exhibition. “Around the World in Eighty Days” same name popular novel was written by Jules Verne at 1872. Inspired by the novel, 19 London based, although originally from out side of England, artists consist this group exhibition.

The story starts from an rather wired English gentleman Phileas Fogg takes a bet if he can circle the globe in actually 80 days. If not he will lose all of his property. So In such hectic journey he will see different culture of each place, technology changes, the height of colonial era, race, politics and international travel. Each artist got inspiration from these various aspects which this novel has. 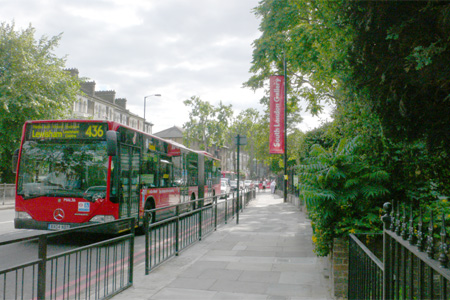 Interesting enough, this exhibition’s held at two venues, located south and west center, so to cover all the works the audience will travel inside London with any of London transportation. During the travel, you may meet someone, discover something, or end up with changing your life! who knows!

As soon as you step into the room, a headless man riding a unicycle, wearing extraordinary colorful cloths captures your eyes. That’s Yinka Shonibare‘s “Man on Unicycle”. 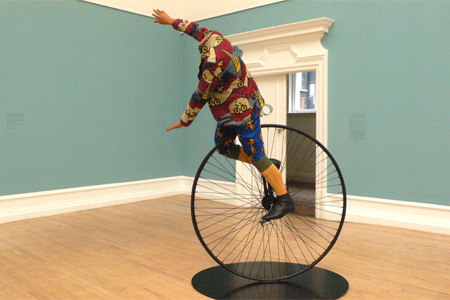 It was said that the fabric he wears are African pattern, at the same time which origin’s are from Holland. So it is also explained as legacy of Europe’s domination of the continent throughout 19th century coronation. 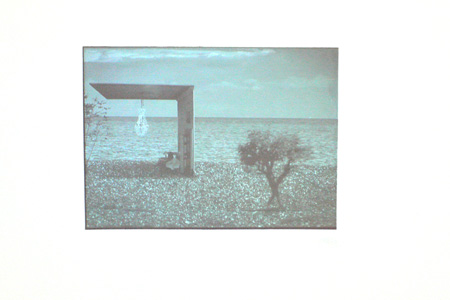 Very small airplane and tiny bunch of tourists travel between inside someone’s house which looks gigantic compared with their size. That’s the video work by Hiraki Sawa. Strange, pretty funny, they may make you feel like traveling fantasy world.

As the title “In Hako” means, a projector in a small white box shows four and half minutes images. You will travel from a doll house by seaside which has swinging chandelier, to where something twinkle falls from the sky. Even inside such a small box, imagination can take you to as far as you want.