Hotel Wonder is La Perla’s outstanding contribution to the apparently endless number of collateral shows and celebrations organized in parallel with the Milan Furniture Fair 2006 in via Tortona, an area in the south of the town that is becoming increasingly trendy in the worlds of fashion and design. 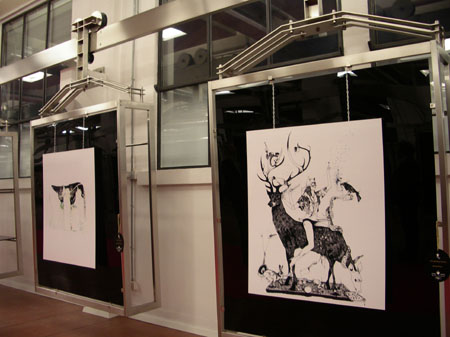 The renowned Italian lingerie company has set up an exhibition in which over forty international illustrators have imagined the spaces and the functional areas of a fictional hotel “suspended between dream and reality”, to say it with the words of the show’s press release. 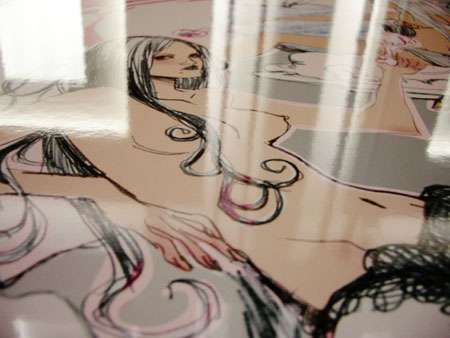 As demonstrated by the lounge phenomenon in the 90’s, the concept of luxury hotel still retains a symbolic value that inspires pop culture with images of old school sophistication and suavity. Therefore, it comes with no surprise that some of the illustrators have opted to depict the rooms, the clientele and the staff of this imaginary hotel with a glamorous style that is often reminiscent of 60’s and 70’s graphic and interior design. But the overall mood is not that of a plain historic re-enactment: the otherworldly atmosphere, the delicately eerie inhabitants and the sensuality that pervade some of the best illustrations would make Hotel Wonder a must stop, if it was real Milanese venue. 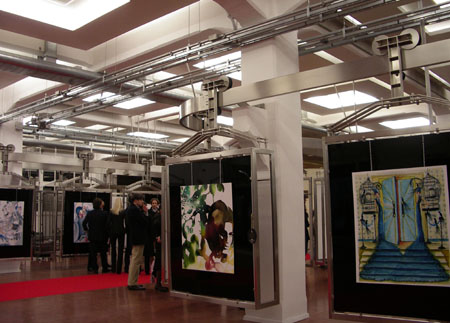 David Bray, for example, imagines the Kitchen Porter to be a masked young lady that manipulates cutlery -with the assistance of a variety of different animals – while riding a two headed deer; Marguerite Sauvage’s kitchen is filled with undressed cooks deeply concentrated on the preparation of a pink dinner; in Miki Amano‘s library, two Gothic Lolitas check out books in a monastic environment. Those in need of a little bit of rest can use Linn Olofsdotter’s toilet and be welcomed by several cats into a room adorned with anthropomorphic furniture inspired by surrealism. For those who want to see more, La Perla has transferred the entire hotel on the internet.