In a note not directly related to this article, the Berlin Biennale has begun at the end of March. As I noticed with interest, a number of small to medium-scale, yet high-quality exhibitions have been planned to coincide with this major art event. I can feel the enthusiasm of these local exhibitions aiming for even higher quality.

“Resolution/Dissolution II” is the second in a series of media art exhibitions. The first one, held from January 1st to February 12th, coincided with the Transmediale 06. This art show was made possible mainly through the Berlin-based media artist, Friederike Anders. She is a member of “Realism Studio”, which has organized a number of interesting exhibitions at NGBK (Neue Gesellschaft fur bildende Kunst e.V) in the past.
Thanks to her international career, there were many notable participations of up-and-coming media artists from overseas. 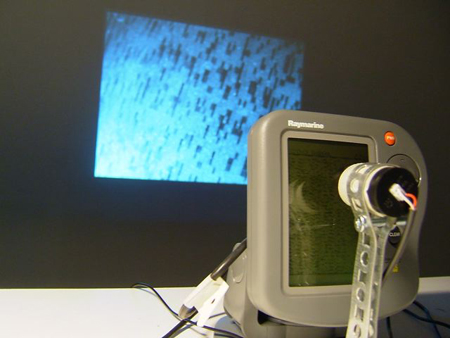 Looking back now, I regret not having documented the first exhibition. The subtitle of the second exhibition is called “Signal Noise”. In most of the exhibited art works, common technology has been transformed into unordinary uses. 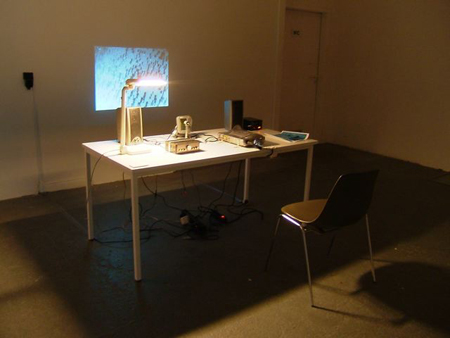 For example, sound artist Carl Michael von Hausswolff applied sonar radar – such as the one used for commercial fishing – in order to detect sounds in space that are out of the range of human sensory perception. By using light from a slide projector, Achim Mohné focused on the dust dispersed by visitors and projected it on the wall. Here, everyday appliances are transformed into creative works. 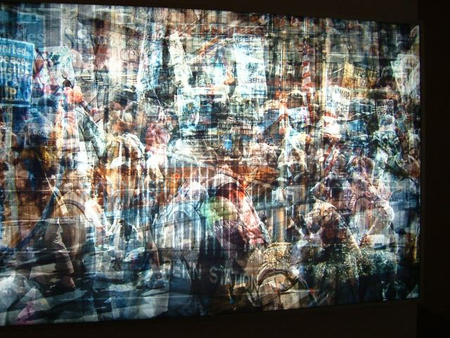 Similarly, Jim Campbell printed real images from newscast, newspaper, and films onto slides and exhibited them, layered like a painting. As a result, the final composition suggests a completely different metaphor.