In the spring of 1981 Trudy Myrrh began promoting a gathering for like minded artists – an event which she dubbed Ylem. “Ylem” is a Greek word used to describe “the material from which the universe emerged”. Myrrh was deeply inspired by science and felt a growing interest in a new medium – one greatly influenced by the emerging Silicon Valley computer industry.

Now, after nearly 25 years, Ylem continues bringing people together to discuss the intersection of science, technology and art. Ylem provides a much needed forum for artists experimenting in unexplored spaces that don’t easily fit into the established channels for the respective fields. 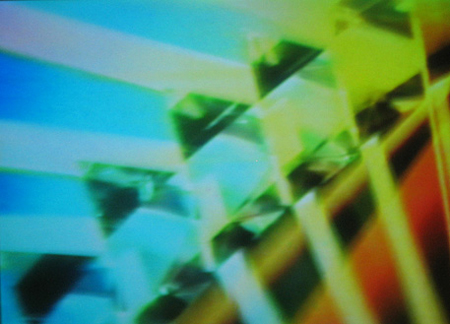 At the January Ylem Forum, held at San Francisco’s Rx Gallery, Alex and Martha Nicoloff presented their latest work on DVD – a mesmerizing light sculpture filmed from varying angles and distances. The sculpture lives in the dark basement of the Nicoloff Berkeley home. Using a solar collector situated in the garden, they channel sunlight underground and across a 60 foot long hallway. The focused beam illuminates a few dozen carefully placed, hand made prisms on a slow moving turntable. Alex and Martha use various techniques to record the emitted light, sometimes looking to post production to modify color and form. 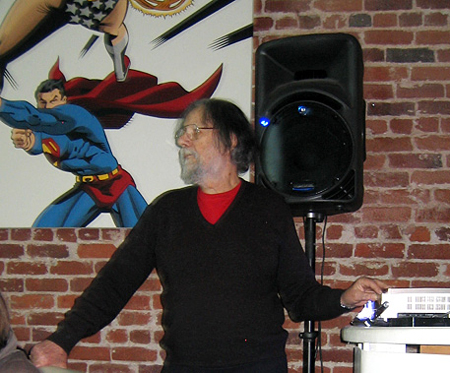 “We find, track and capture video imagery moving in the solar spectrum. During many one pass encounters on the wing. a moment in time appears when random beginnings on the edge of chaos, become a kinetic epiphany.” – Alex and Martha Nicoloff

While all components, both mechanism and capture, are purely analog, the patterns and colors that emerge have a procedural feeling – almost like one of Spot’s Electric Sheep. 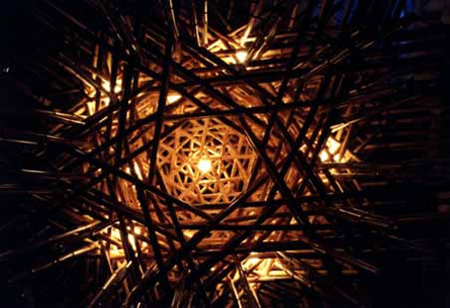 The upcoming Forum in March will feature Akio Hizume, an architect/artist/musician who builds large scale mathematical objects and performs minimalist music based on math principals such as the Fibonacci sequence. Like other great minimalists, Hizume’s work appears simple, yet is laden with complexity. For example, his polyrhythmic composition “Real Kecak System” playing at 400 beats per minute would not repeat for 522,629,966,200,000,000 years!

Find out about Forum gathering and read back issues of the Ylem Journal at the Ylem website. The next Forum will be held in March at the Rx Gallery in San Francisco.