Nicolas Bourriaud and Jerome Sans, the co-directors of the Palais de Tokyo in Paris are celebrating their departure by a significant exhibition titled ‘Notre Histoire…’ (Our History). The Palais de Tokyo opened on 22nd January 2001. The new director is Marc-Olivier Wahler, a Swiss, director since 2000 of the Swiss Institute – Contemporary Art (SI), in New York.

The opening of the exhibition was Friday the 20th January and for nothing in the world I would have missed the biggest event of the New Year (!). However, I went back a week later to appreciate the exhibition in a quieter atmosphere.

Back to the opening night, in the entrance as I arrived, the hallway was already full, as I never seen it before. A hype crowd was fooling the ground of this highly talked about location. 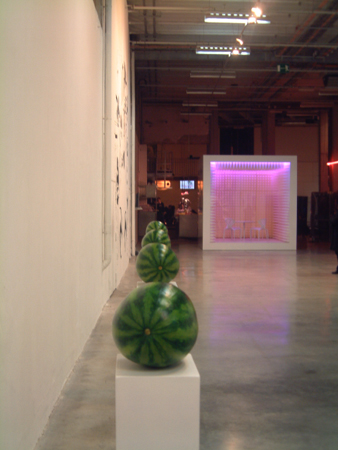 The formers directors and actual curators of this exhibition are in someway giving an intimate insight of their own journey at the Palais de Tokyo: for the past 5 years, Bourriaud and Sans have made their priority to introduce the artists of this new century to the French.

For this show, they have asked to 29 up-and-coming artists, French or living in France, to exhibit their most relevant work to what is our world today and what is their donation to this world.

As the press release was writing: “Notre histoire…” attests to this repositioning of the figure of the artist, who is no longer a proud loner, riding along astride reality, but is in fact the supplier of a matrix that anticipates reality. The premise of “Notre histoire…” is that artists have more than just something to say.

And some of them do it pretty well. I could make a list of the 29 artists showed but I chose to write about the ones I’ve been touched by. 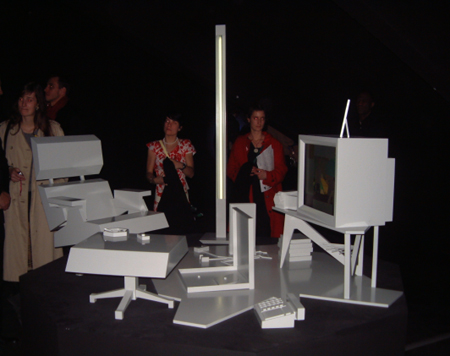 On my 1st visit, 2 artists who work together under the name of Kolkoz (Benjamin Moreau and Samuel Boutruche) – really grabbed my attention. In their digitalised film about their Honk Kong holiday, they manage to humanise the story. The fiction is present and we watch an enthralling story. This feeling is reinforce by the fact that the film is presented on a small screen which looks like a TV and is placed in the middle of a lounge – armchairs, sofa, lights, coffee-table assembled in front of this TV – all that very cosy! Also there’s a comical ambiance in this movie, a sense of irony as we recognise the artists themselves as the 2 main characters of the feature.

Bewitched by the Kolkoz room, I manage to get out and made my way to the three-dimensional landscape that takes shapes throughout the whole of the Palais de Tokyo’s exhibition galleries.