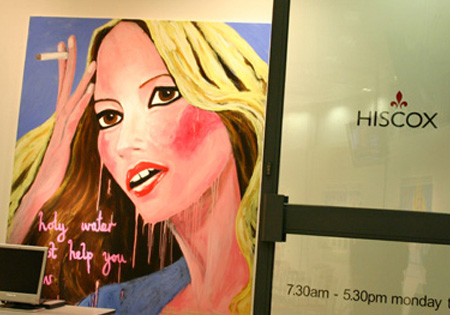 It is only 5minits walk from shorditch, which is always busy with design offices, gallerias, and studios, that is the center of CITY, the place for money and business. HISCOX gallery is placed in it. Hiscox is Europe’s leading insurer, covering fine art insurance as well. Hiscox Art Projects, located on the ground floor of the huge company building, aims to give a chance to see contemporary collections and exhibitions to those living and working in the City. Now we can visit the painting exhibition ‘The Beautiful and the Damned’ by Henry Hudson and Stella Vine. 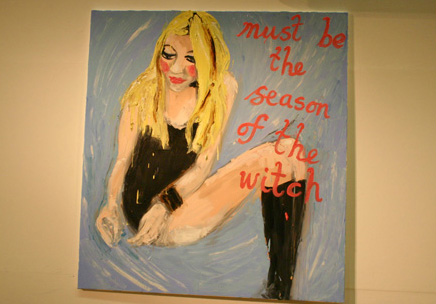 Stella Vine has been known in a rather scandalous way, such as her controversial paintings of bleeding Princess Diana or the way she was found by Britain’s most famous art collector, Charles Saatchi, when she was a stripper.
Her works mainly respond to familiar images from tabloid newspapers to show some of the more tragic aspects of the lives highlighted by the media. At this exhibition she focused on Kate Moss, who is a supermodel just enlivened tabloid with her boyfriend and drug issues. 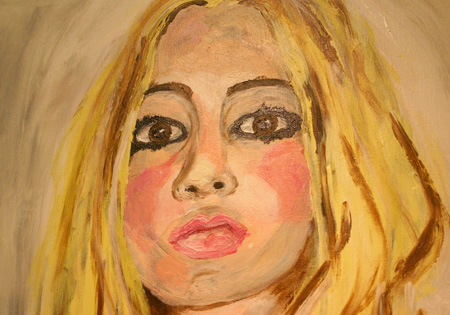 Most of the girls love gossips, I mean love. I don’t think it is only me that starts reading gossip corner when I read tabloids. But we don’t take it seriously.
It is fun because it happened to someone else although, it looks like this artist tends to be possessed, depressed and hurt by tragedy in the media.
This kind of feeling is seems to be based in her works. Likening Moss to Shakespeare’s tragic heroine Ophelia shows her sympathy. Using heavy impasto paint and bright colors looks somehow unbalanced, teenage. That’s why perhaps; her works remained me of ‘virgin suicide’ by Sofia Coppola. 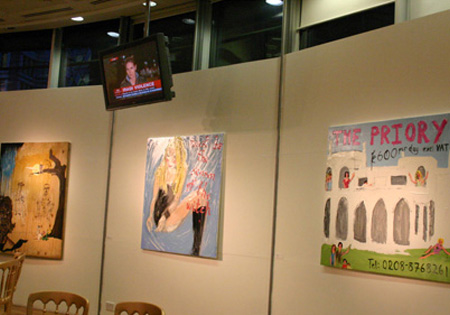 On the other hand Henry Hudson draws celebrity culture where reputations are made and lost overnight. He uses mixed media including painting, drawing and collage to present current affairs like bird flu and the royal family. He made them very disgraced and gross figures. I really feel ill with these grotesque and shocking pieces, beloved in British art world.