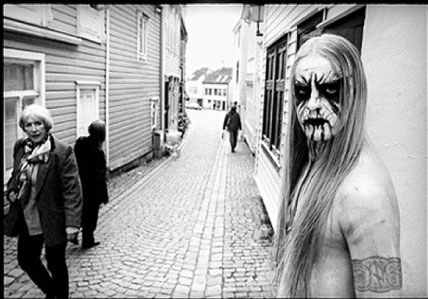 Looking at the photographs currently on display at the trendy Blk/Mrkt Gallery in Culver City, Los Angeles you get the feeling that here we have a photographer who, as a teenager, looked more at the Kiss album covers than actually listened to the music. 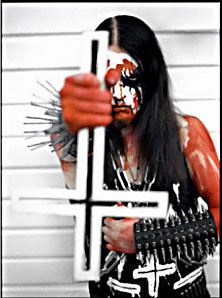 Peter Beste is a photographer based in Brooklyn NY with a fascination with subcultures. His strongest work, exhibited at Blk/Mrkt, is the portraits he took of a bunch of Black Metal fanatics in Norway. It’s a very bunch of music lovers who at some point in the 1980’s combined the sound of dark, rhythmic metal music with the theatralics of cheap horror movies and goof old Viking behaviour. 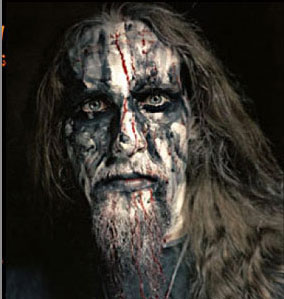 It is a very peculiar scene indeed and the portraits grow even darker with the stories that accompanie them about Black Metal fans and musicians that were responsible for the burning of over two dozen ancient Christian churches in Norway, some of which were immaculate wooden hand-carved pieces of art, the most famous case being Varg Vikerness’s arson of the Fantoft church in Bergen, Norway. For some, the level of dedication and extremism doesn’t stop there. Varg Vikerness, a.k.a. Count Grishnackh, from the band BURZUM, brutally murdered Euronymous, guitarist of influential Black Metal band, MAYHEM by stabbing him in the head, back, and neck 23 times. This was the first in the string of several murders within the Black Metal scene. This fact remind us that this is not Haloween once-a-year fun for this people but a lifestyle that sometimes borders on serious crime. In this context the pictures become even more haunting than the faces we are looking at.