The 2nd Yokohama International Triennale of Contemporary Art got underway on September 28th, 2005. The Triennale features the work of 86 participating international and Japanese artists, and two enormous warehouses located on Yamashita Pier have been transformed to its main exhibiting space to accommodate its scale. 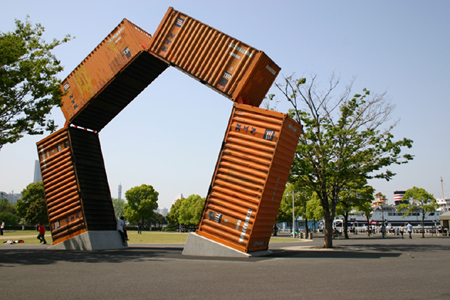 When I first entered the Triennale, it was astonishing to see its entrance gate. Four gigantic containers are built into an arch, and it was paving the way for an even more gigantic exhibition. This entrance is one of Luc Deleu’s “Speybank” series. He came up with this idea when he was traveling around the world on a cargo ship for 72 days. He also named this piece after its ship which also had the same name with a ship that Germany seized from England during WW II, and was anchored in Yokohama for 2 months. 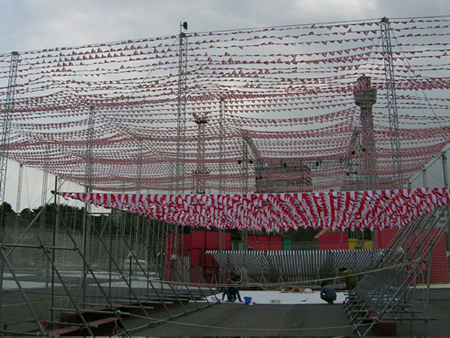 There is a circus venue set up after the entrance gate that fits the theme of the Triennale “Art Circus – a jump from routine life”. There was an opening act for the Triennale by an art circus group, Etokan Buren Cirque in this circus venue. The theme of the Triennale was built its outreaching philosophy to offer an alternative to the conventional style of art exhibition in which the observer simply looks at the works, instead offering a dialogue-based exhibition in which the barrier between the observer and the exhibitor is transcended. It eventually generates the jump of expressiveness of art and the jump from everyday life. Therefore, there are many interactive and interdependent works in the Triennale that encourage the involvement of audience. 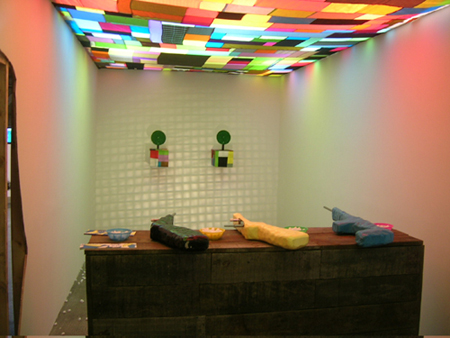 “SOI” means “alley” in Thai, and this installation by “SOI Project” conveyed inner Bangkok’s chaotic but pop energy that Bangkok possesses. This art project was designed specifically for the Triennale. In their installations like an installation that combines a shooting game with images or a chill-out bar where people can relax , we can easily forget the fact that we are in Japan. As a part of the project, there will be a live performance event SOI Music Festival with Japanese musicians during the Triennial.