The art book “THE ALBUM” has been released by BEAMS T. In it a relationship between vision and music is consciously enclosed. Neither is a main as “THE ALBUM” approaches the realm of art on both sides of vision and music. Its concept is that some readers sense music based on a vision and that the reverse is also true. Before the release, a party was held with the participating artists and key players from art scene at UNIT in Daikanyama. 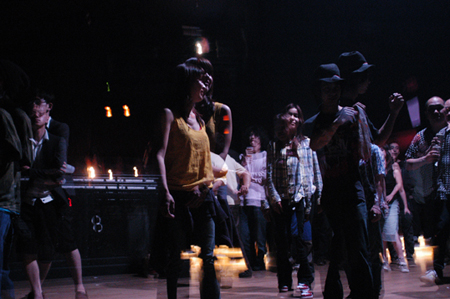 This event was held using 2 floors of UNIT plus a space called “Saloon”. From rock, techno, house, electronic, to noise music, range of music was so broad; the artists Mukai Shutoku, DMBQ, ALTZ, Nipponia Electronica and so on participated. The l lineup of that day could tell the content of the art book. More over, unique artists like Naohiro Ugawa, Exonemo, Jiro Ohashi and so on were picked up for vision and lighting. The party had optical stimulation. The lineup was also fitting with the content. 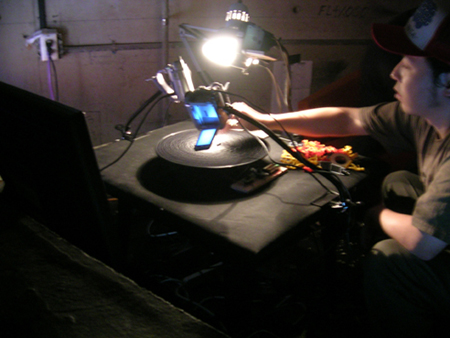 The VJ performance with an installation by the art unit Exonemo of Kensuke Chihara and Yae Akaiwa was so surprising and new. They used various materials on a spinning stage that integrated with the scenery. The movies were shot from 3 angles with 3 DV cameras, each movie was screened with 3 projectors. Also, they ran movies on 3 monitors, then shot them with a DV camera and screened them with a projector. This performance, which connected analog and digital, greatly surpassed what had previously existed in the field and was so exciting. The appearance of one object changed every second by the various angles. It gave a strange new feeling for the audience. Anyone could hit on the method like this but it isn’t often performed. Exonemo presented it as art. Very fantastic. 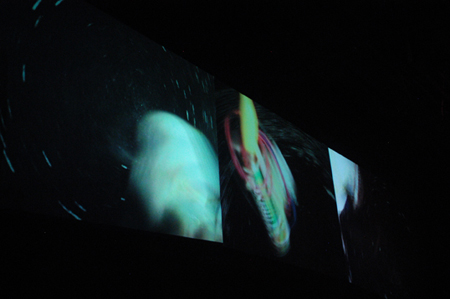 Next is the live by Shutoku Mukai, who was the former member of the Numbergirl and has offered tunes and illustrations on “THE ALBUM”. Its structure was simple: him, his guitar and effects. However, because of its simplicity, the lyrics and music resonanted with a strong power, that created a unique atmosphere. The content of the lyrics moved audiences deeply, aroused their sympathy, reached to their realm of unconsciousness and made for a great artistic experience. Also, Naohiro Ugawa was Mezura taking charge of lighting there for a change. He choreographed the lights with his unique-timing flash and non flash, which made the space psychedelic. It warmed up the air there.