Seems like spring was not the only thing to have arrived to New York lately. The month has been crowded by global designers from all disciplines attending three showcases of excellence in design. A roundup of these recent events included competitive and non-competitive exhibits of ideas in the fields of advertising, graphic, interactive, industrial and environments. 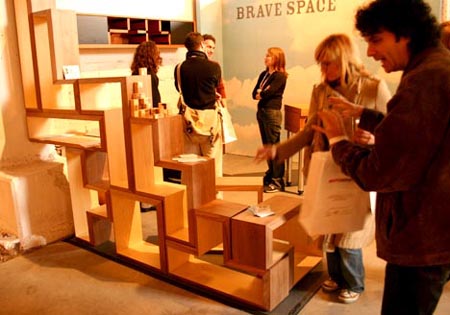 The first of them was the One Show Awards, which was celebrated on the night of May 11th at the Jazz at Lincoln Center Auditoriums in Columbus Circle. Both the traditional One Show as well as the One Show Interactive events were held together, but in separate halls, the second one overlooking Central Park. A big party for the winners followed at a swanky rooftop club near Penn Station.

The International Contemporary Furniture Fair was held from May 14th to 17th at the Jacob Javits center. The global showcase of cutting edge furniture and industrial design enjoyed an enthusiastic attendance of designers and aficionados alike. Rumors have it the after parties were pretty packed too.

Last but not least, on the other side of the East River, Brooklyn Designs took place from the 6th to the 8th of May. The exhibition was focused
on the work of up and coming designers who have set up shop in Brooklyn. The show effectively highlighted the vibrancy and talent of the new wave of design.