Being a Londoner living abroad, I couldn’t miss the opportunity to promote a exhibition celebrates the work of Hussein Chalayan, twice-crowned British Designer Of The Year currently on in the Netherlands.

I’ve always wondered how you could explain Britain and Britishness? As a kid coming back to England after a summer in Warsaw (I’m half-Polish), I would always try and identify the things that made my home country so different from the continent. I think in the end I decided it was the road signs, the dampness in everything (which somehow made colours moodier), the London accent (which I will always love with all my heart), the mix of different cultures and old people (who always seemed very different to their continental versions). Maybe these exhibitions will go some way in helping you decide your own essential ingredients that make up ‘British’? 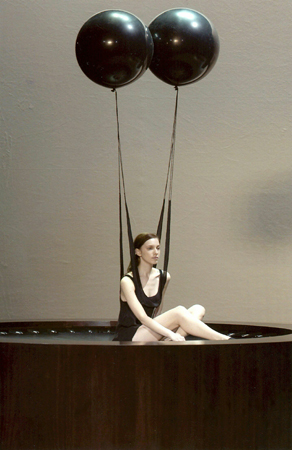 Groningen may be a bit of a trek from Amsterdam but it’s definitely worth the effort, especially if it’s to visit the Groninger Museum which has a great reputation. The Museum’s retrospective of Hussein Chalayan’s first ten year’s of work also happens to be his first solo exhibition, and focuses on the British/Cypriot fashion designer’s intriguing cross between fashion and art. 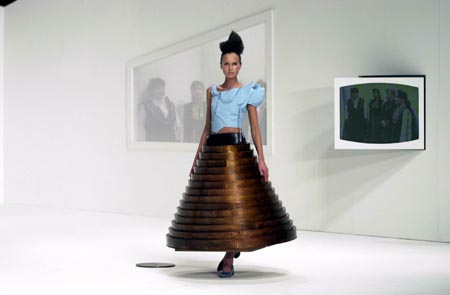 I don’t think many designers manage that cross-over convincingly but Chalayan has always drawn deeply from both his own multi-cultural background and from a wide circle of disciplines such as architecture, philosophy and anthropology. The result is deeply intriguing work, often comprising outfits, installations, photography and video work.

Since his graduation from Central St Martin’s in 1993, he has developed a name for his innovative, unusual fabrics with unorthodox techniques and in April 2004, he finally opened his flagship store in Tokyo, which has received acclaim worldwide. The exhibition runs until 4th September so you really have no excuse to miss it. Check below for opening times.