Flash conference FITC 2005 was held on April 9th through 11th in Toronto, Canada. There were over 60 guest speakers from all over the world. The familiar faces like Yugo Nakamura, Collin Moock, and Joshua Davis, and big faces in design industry, like David Carson and Robert L. Peters gathered for the fourth time this year. 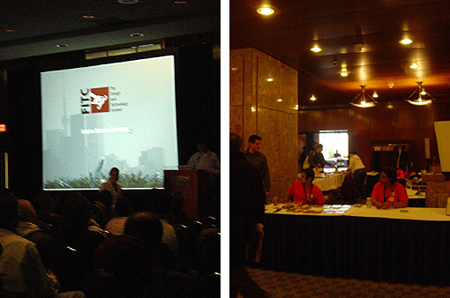 FITC’s excellence is its size. Over 80 talk sessions, workshops and panel discussions took place in six different halls. It was divided into three categories by “business”, “creative”, and “technical”. The topic on the World Wide Web was apparent in every category. I’d like to feature some of the more impressive sessions on what’s hot in today’s industry. 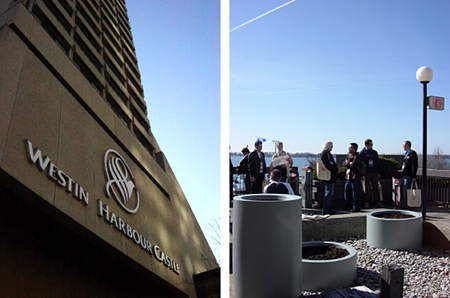 This year’s FITC was held at the high-class Westin Harbour Castle hotel, which faces Lake Ontario. We had good weather with clear skis throughout the conference, and everybody enjoyed looking over the beautiful lake from the hotel’s deck. The audiences as well as guests were in a relaxed atmosphere enjoying cups of Starbucks coffee, which was given out in the lounge. 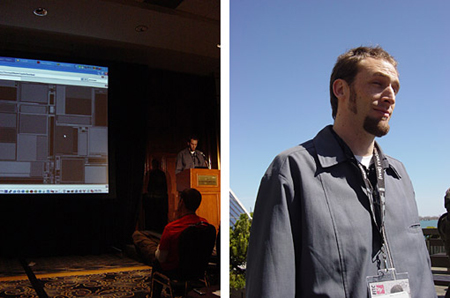 After the keynote speech called “FLASH the FUTURE”, Marcos Weskamp started off his session called “Expression Through Information Visualization”. Expression of social networking relation, “Fickr Graph” (the winner of FITC award for experimental grand prix) and visualized google news called “Newsmap” were presented with a working model. He ended by stating strongly that he’d like to be able to simply visualize the devastating amount of information. 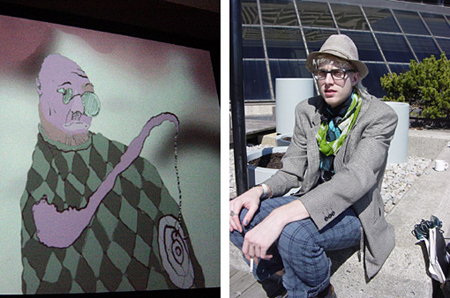 Geoff Lillemon’s session called “Oculart“, which is a made up word combining ocular and art, started with a projection of a warped Eiffel Tower and eccentric music. His recent work, “Oculart Orchestra” which he explains as art performance with visual elements uses a web cam to capture the movement of hands, in order to make his strange characters make noises on the computer screen. The audiences were enchanted by his distinctive world. 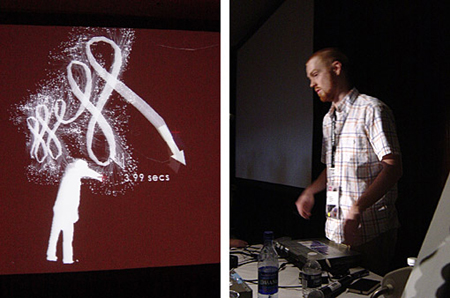 The next entry was a cool guy, Evan Roth at “NI9E.COM” from New York City. His session’s title was “Greek Graffiti”. The audience loved many of his post office themes. He also introduced “ASCII Graph” which combined ASCII art and graffiti, and “Graph Analysis” which analyzes graffiti handwriting. He explained that he wanted to communicate in a new way with things that really exist in today’s world. After seeing him on the stage, I just had to say he was the coolest guy on that day and I’d like you to check out his web site for the full details!