From the 8th to the11th of January, the “What’s good? Conference” was held in Hong Kong. It was an Art & Creativity festival coordinated under the auspices of the Hong Kong Artcenter and organized by the design office “AllRightReserved” and SK Lam, the former general manager of “IdN”. 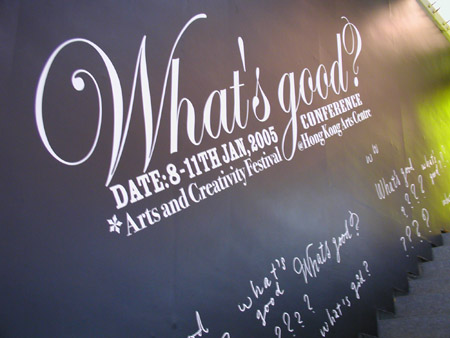 “What’s good?” is a query that can be perceived as simple or deep when talking about creation. The organizers wanted people to answer the query taking into account their personal realizations, sensibilities, conscience, sense of value and taste for surroundings while assessing how said answers intertwined with each other. 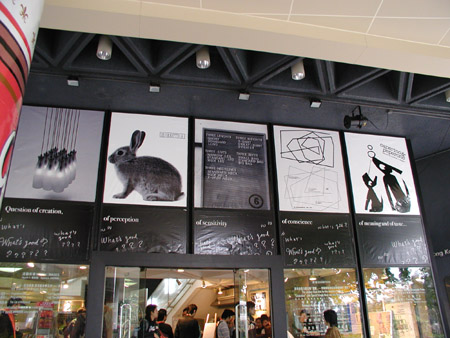 13 speakers in 11 pairs came to Hong Kong from cities around the world, to talk about “what’s good?”, the source of the creation and the inspiration. They were; Colette and Maison Martin Margiela from Paris, Droog Design from Amsterdam, Peter Saville from London, Christopher Doyle from Hong Kong, and from Tokyo Groovisions, Kazunari Hattori, Yugo Nakamura, Kashiwa Sato, John C Jay, and Chiho Aoshima + Aya Takano of Kaikaikiki. Because of that gorgeous line-up, Advance tickets for this conference sold out in a flash. 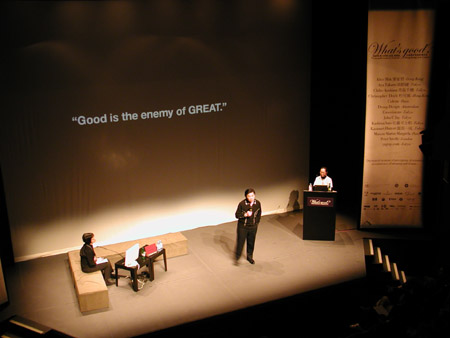 At the conference, each pair had time to speak for an hour and a half. The order of the conference was as follows: Each group showed their own pieces via slides, and talked about “What’s good?”. The latter part consisted of a question and answer period with moderators.

On the last day, with a round-table format, every speaker was on the stage. The speakers from Japan were a bit tame, while there were the other speakers like Peter Saville, who made the audiences excited with his animated replies. And there was Christopher Doyle, who appeared under the influence of liquor. Regardless of good or bad, it was apparent that the personality of each speaker came out naturally. 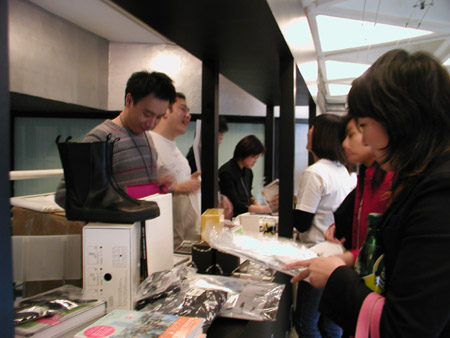 In the Hong kong Artcenter,the spot of the conference, special shops were open only during this event to sell the speakers’ products. A lot of people crowded there at every break, and most items sold out. 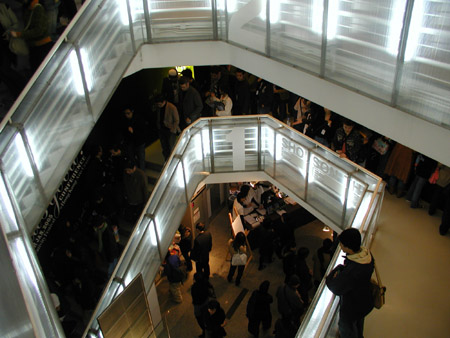 The audience was composed almost entirely of persons engaged in design and students who study design or art in Hong Kong. The audience was exalted with the opportunity to hear what all the creators had to say. It was a rare opportunity for them to hear directly from the world’s top creators. To the young people who had experienced each creator’s “What’s good?”, this event must had been the opportunity to think about their own “good” and return to their creations.