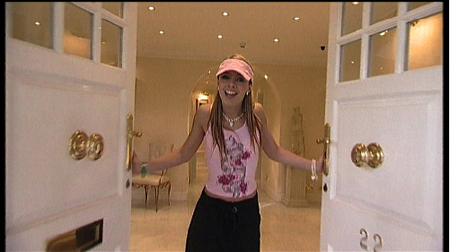 This Summer, an eye-catching advert was shown on TV. A young celebrity called Sarah Rivers shows the viewers around her new house, telling us how she was ‘discovered’ while shopping with her aunt in a department store, and now she has got everything she dreamt of… she proceeds to exit the front door, and the next moment, she is lying on the road in her school uniform with a screeching of an automobile in the background. She lies still. 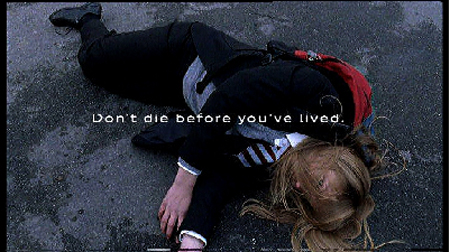 A poster is seen on the platform in the underground. At first sight, it looks like an ad to promote an album of a newcomer, but in the center of it is a banner saying, ‘cancelled.’ Further inspection tells us that Lil’ Big was killed crossing the road aged 14. Don’t die before you’ve lived.’ Another poster shows Vanessa, also a newcomer promoting her double A sided single. ‘I Told You So’ and ‘True or False’ are the song titles, and a reputable music magazine give it a high rating. It has also been ‘cancelled’, due to her untimely death aged 14. 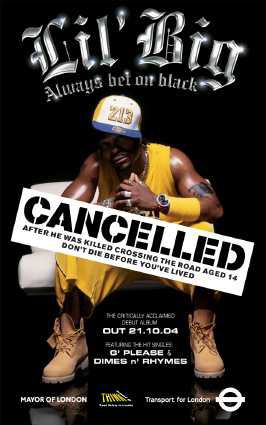 Both are part of a ‘Don’t Die Before You’ve Lived’ campaign conducted by Transport for London and began in April, targeting teenagers for prevention of fatal accidents on the streets. Sarah Rivers and Vanessa, the seemingly ‘real’ celebrities, were all fictitious people. As they both died young, they were unable to use their potential and died before they experienced fame and wealth. It is the same for Vanessa, with the fabricated song titles and the music magazine providing an extra twist. 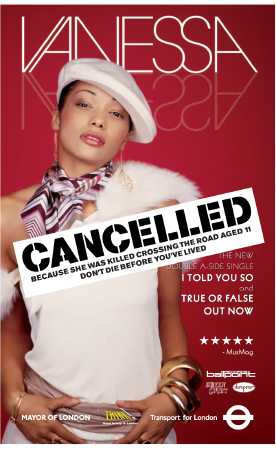 According to Transport for London, 717 young persons in London were involved in pedestrian accidents in 2003. About a quarter of accidents involving teenagers while walking occurs on their way to and from school, and especially boys aged 11 to 14 have a highest risk of being hit by cars. Many are easily distracted by the use of mobile phone, texting and personal stereos.

Whether you aim to become a celeb or a singer, aspiring to a dream is common among teenagers. This campaign warned them not to waste your life by getting involved in road accidents that could have been prevented. Its powerful message struck a chord with many young people and has led to successful results; a ten percent decline in the number of casualties in London.