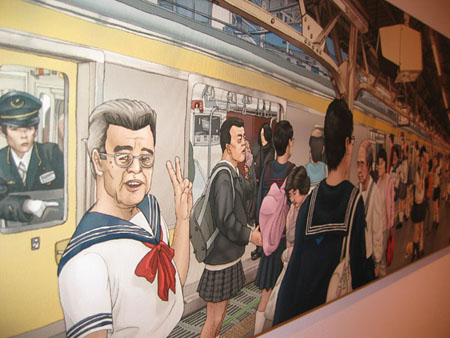 Los Angeles based illustrators Kozyndan graced Toronto with their warm presence, lavish illustrations, and the launch of their new colouring book ‘Lactaid Dreams’. Magic Pony Gallery kicked off Kozyndan’s first ever Canadian exhibition on September 24 with a buzzing and colourful opening reception. Included were the artists’ original pencil illustrations from the colouring book, panoramic paintings, as well as mixed medium pieces using materials such as paper and wood. Greatest of all, however, was the opportunity to pick up a coloured pencil and do the best to stay within the lines on a wall full of Kozyndan post-ups. When was the last time you’ve been able to ‘test-drive’ a colouring book? 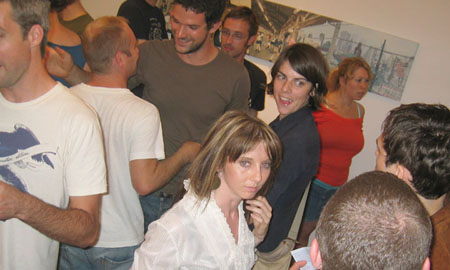 Having most recenly seen their work all over RESfest 2004 promotional material, Kozyndan have done work for many companies including Nike, Wieden + Kennedy, Idn, Electronic arts, and magazines such as Tokion, Giant Robot, XLR8TR, Official Playstation Magazine as well as CD covers for Lyrics Born, The Postal Service, John Mayer and Weezer. 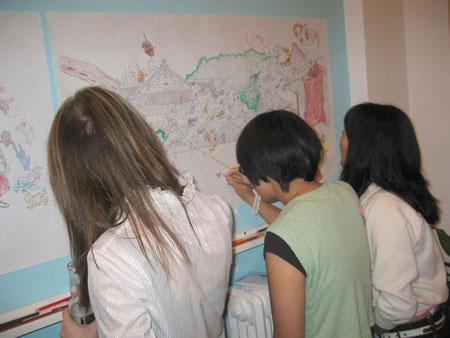 Lactaid Dreams is full of high energy illustrations. Even after looking through it numerous times, something new, interesting, mostly humorous and out of place, pops out of the background. Visually pleasing, well excecuted, and context that leaves you giggling inside for hours, Kozyndan’s work is a must-see. The exhibition will be running at Magic Pony through to October 25, 2004. Much to appreciate.