I thought about reporting something relevant these days here: an opening, a concert, some event. However, things seems pretty quiet and lame this summer (which actually feels more like autumn).

In fact, the landscape is so dull that the only thing which is catching all the non-invited attention is the Republican National Convention, or more properly, all the protests being organized in its occasion. Can you believe that?

Maybe that explains the apparent tedium: there’s some unease in the air, as (mostly democrat) New Yorkers prepare to receive the GOP orchestra in full swing for a week. People are wary it can get tense with all the sensitized security measures that are already taking place. I don’t think I need to explain why so much dissent is going to be concentrated in the city that week: the fact is that the republican bashing is set to attract haters from all over the US and the world.

What I find interesting is that the public outcry is being redefined by mobile technologies and artists using them to broadcast their dissatisfaction as well as the voice of networks. I thought the collection of these public performances and projects are worth talking about in this case. It could almost be described as a parade of mobile communications and media in politics. 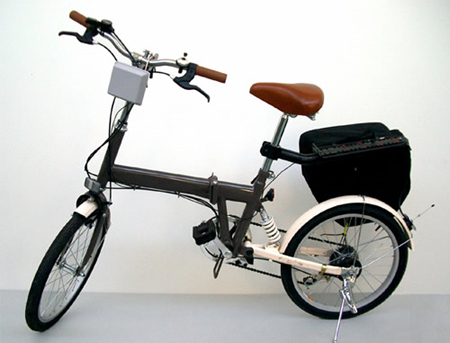 Bikes Against Bush is a bicycle fitted with spray cans and a wireless laptop. It receives messages from mobile phones or the web and then sprays them on the floor as it rides. The project is a clever combination of the Institute of Applied Autonomy Graffiti-Writer and the Magic Bike, the latter one also taking part in the protests.

Communiports is a project by a media collective of sound and media artists, which consists of low-powered radio transmitting backpacks worn on-site by reporters.
They will be broadcasting live all the events from the streets. 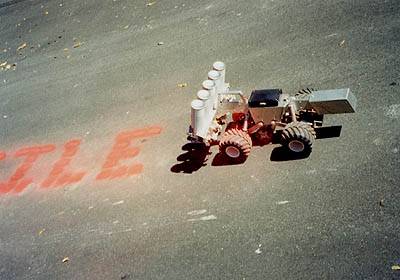 A couple of projects using mobile phones as a means to organize collective expression are making their way to the marches. TxtMob uses mobile contact lists to distribute text messages in real time to subscribers of the group. Moport puts camera phones at the forefront of real time mass journalism, documenting all the occurrences of the week in a moblog.

The Bureau of Inverse Technology will have a special transmitter that sends bursts of radio signals that will jam airwaves sporadically, like electronic warfare tactics.

A multinational crew will be putting together an intervention which is an urban protest game (I bet you never played one of those before). Operation Urban Terrain uses wireless networks and the streets to criticize the militarization of civic life – or whatever civic means these days.

Finally, some old-school media is joining the affair with the network, with sites that act as distribution centers for march posters, some of them pretty well designed actually.

Webcams, radios, laptops, phones, bikes: the wireless crowds launch Protest Version 2.0 this summer. They say the Smart Mob is a tidal wave of transformation these days, and the one gathering for the counter-convention seems quite invigorated and committed to wake up the city that never sleeps.