In his Western Addition flat, nestled between the kitchen and his bedroom is Eric Bailey‘s painting studio. It is filled with an easel, photo references of birds, dogs and children and a jar of paint thinner. Smeared across a palette are gobs of chunky pigment used to render his most recent piece commissioned for the cover of a friend’s hip hop album. It depicts a boy of mixed blood standing firmly on the ground wearing oversized boxing gloves, shorts and a prize-fighter belt. The painting still sits on the easel, drying as Eric talks on his phone to the record label’s manager. “So you’re gonna come through at 2:30…, yeah, cool…, well, I was thinking $300…, I mean, that’s a pretty good deal… (with half-joking conviction), you know Terry’s my friend and all and I wanna help ‘em out…, cool, peace.” With the flip of his phone, the deal is done and Eric flashes a smile and a giggle. 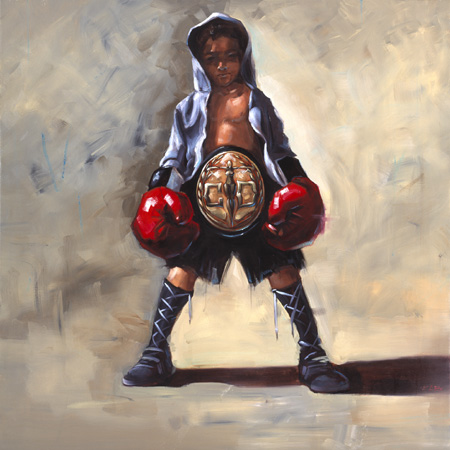 Our meeting today isn’t unlike most days I’ve spent with Eric. I’ve known him for… shit, it’s been 12 years! Despite his “baller” tenencies, he is undoubtedly one of the kindest, most talented and passionate individuals I know. His love for life and all people is reflected in his personality as well as his work. Now don’t get me wrong, Eric’s life ain’t all flowers but his grounded outlook on life enables him to shine in spite of it all.

Eric is not only trying to survive in the city but thrive off it. Directly influenced by the neighborhood he lives in and city life as a whole, his visual language can be harsh and threatening. But it is not fear that Eric focuses on. Upon closer inspection, there is a playfulness and youthful spirit which seems to negate these first impressions and ease the viewer. 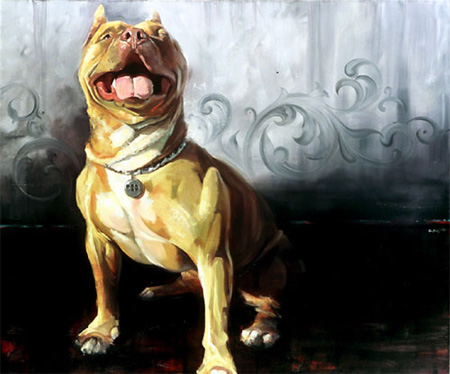 Hanging above the couch in the living room is Ted (Oil on canvas, 72″x60″, 2003). In it a pitbull sits in a staunch pose, every muscle defined with layered strokes of the brush. Instead of focusing on the cliche that pitbulls are vicious animals, Eric portrays Ted with an almost gleeful smile and loyal eyes. “Everyone thinks that pitbulls are dangerous animals to have but they’re not. My brother’s (pitbull) is goofy and playful and would never hurt a thing.” It is this pluralistic and often contradictory aspect that inspires Eric in his work and life.