It’s hard to believe the Sonar Festival began way back in 1993. So much in global music and art culture has changed since then. Now in its eleventh year, the 2004 Festival program features music, art and all the experiments in between.

In previous years, Shift reporters have covered the Sonar Festival as a ‘total’ experience. This year’s Sonar coverage focuses specifically at the art component of the Festival. Under four categories and at numerous venues, the program offered an in-depth journey through the realms of digital art, audiovisual creation, and new technologies. 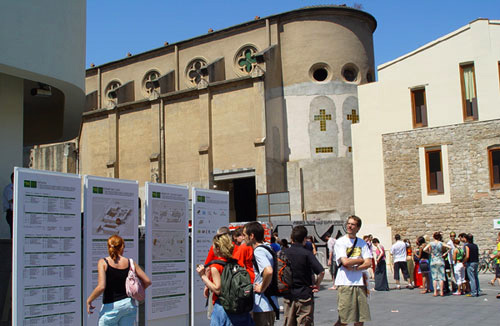 It was impossible to see all of the artists’ performances and exhibitions at Sonar, due to the scale of the event. This report is more an ‘overview’ of the Sonar art program, with coverage of artists selected not on merit but on my ability to be there at the time and place of their displays – I spent a lot less time drinking beer and dancing like a fool in the sun than most of the other media!

A ten minute walk from the main venue, down the hectic ‘Las Ramblas’ (Barcelona’s main strip of action) and I arrived at the Centre d’Art Santa Monica, which this year showcased the Sonarama progam, with a series of installations, software presentations, and audiovisual concerts.

The first talk in the main hall was a software presentation by delire+pix, a New Zealand-based duo. Projected live on-screen was the acmepark.com project, with translucent three dimensional balls triggering audio as they were manipulated in space by playstation controls. The artists work with open source code to create virtual objects that behave in real-time, much like musical instruments, or in their words, an ‘organic guitar’. 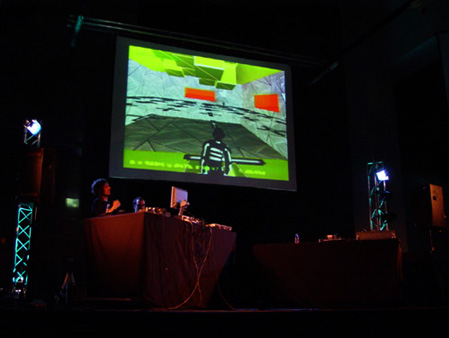 It was interesting to watch the process of learning involved, that the further the user manipulates the objects, the more they can create their own individual outcomes. And it’s good to see artists creating a new type of software program to be used with a commerical gaming device – like a Sony Playstation controller – which a number of other artists throughout the Festival had also adopted for their own use. 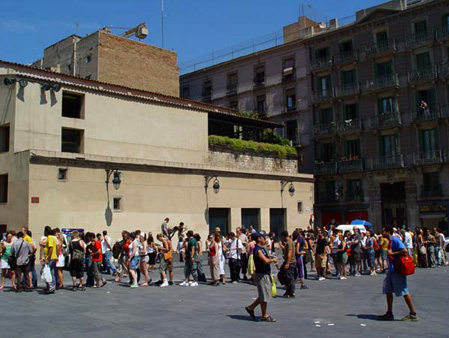 The square in front of the Sonar By Day Venue

As the next presentation was sound-oriented, I decided to head up to the main Sonar event site at the Centre of Contemporary Art, a large indoor and outdoor complex filled with the Sonar By Day activities. By this time a rather large queue of people had formed at the main entrance.