You will open an exhibition at a new shop of “Shop 33” on the same day of the shop opening on the 15th of July. Could you give me a brief of the exhibition?

I’m playing with the motif “Good luck/Bad luck (Daikichi/Daikyo)” with Shop 33 and also making a CD with DJ Q’HEY. I visualize a familier word for Japanese “Daikichi/Daikyo” with completely different interpretations. The release of my first art book “0 Range” is also on the same day so I’m going to have a book signing for people who attend the opening. 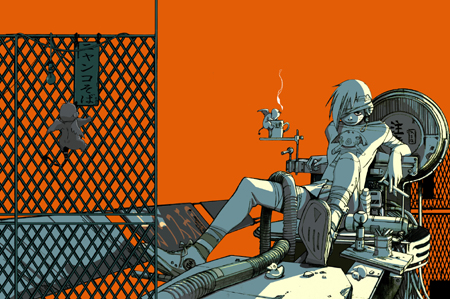 “0 Range” contains more than 500 pieces which you have drawn so far. Why did you think to make this book now?

It’s a kind of “break” to say good by to a 44-year-old. Also, I often look back at my sketch book to find out what I was thinking at that time. Sometimes new idea comes out from it. Those sketches were spread around and I thought that it would be easier to look at if it became a book. For that reason, this book is for myself (laugh). However, in my future works, a lot of characters in the book might be animated so I guess people can enjoy my works more, having a “common idea notebook”. Nameless characters in the book will have a wonderful name if they appear in a film. I hope everyone enjoys it.

What’s the concept of the cover design for this month?

You have worked on a number of great works including “Akira”. What’s the vision for the future? Is there anything you want to challenge from now on?

I want to make a “five dimentional work”. I mean it’s the “wrong” dimention. (In Japanese, “five” and “wrong” have the same sound) I’m thinking to start drawing Manga with a title of “Wrong Dimention”.

I hope the animation industry is kept under control. Animation is basically a media where people can do what they like freely. If some big power like a country or big capital starts controlling it, it will quickly become a dull field. If its morals or ethics start being discussed, a creator can’t play with it freely. Animation is basically for children so I don’t want to bring adult’s ideas into it too much. I want to keep the animation a lawless field for good. In the lawless field, both bad and good works can exist but the point is that lots of works can appear and exist. Interesting and innovative things will come out from such a source.

Personally saying, I think it’s not exciting that Disney, for example, stopped doing cell animation and shifted to computerize the process. Whatever, everyone changes their creative process. I am wedded to the hand drawing and animating two dimentional things.

Have good sex (laugh). If you can make people feel good and the world can change. Also, please buy “0 Range”. Let’s hold an interesting world commonly!