A sunny New Zealand day seemed a poor time to gather in a dark room with 700 sweaty designers, but armed with a media-pass and a triple espresso I’d reason to smile. The event was Semi-Permanent, a design conference and an art/design exhibition run by the crew at Design is Kinky and The Church. 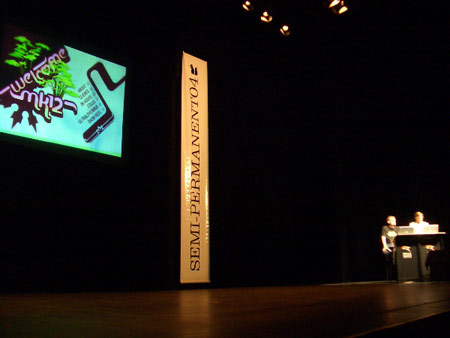 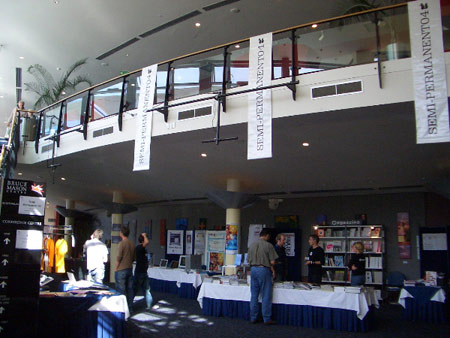 After the requisite T-Shirt give aways and an excited MC yelling ‘Give it up!’ the fresh faced crowd cheered on the first speaker Ben Radatz of MK12.
We were treated a snap shop of there life time work beginning with there first animation project right through to there most recent work.

Less designers more artists, MK12 is a vehicle for them to express their ideas on motion graphics. The work seemed to be animated graphic design, an abundance of flat 2-d planes moving in a 3-d virtual space mashed up with jarring sound effects produced in there in-house studio.

The work seemed influenced by constructivist designers El Lissitsky and Moholy-Nagy, Americana kitsch, vintage VW Kombi adverts and the Photoshop madness of the Attik. It was an E-boy meets David Carson mish-mash.

Judging by the cheers the crowd loved it. Personally, I was disappointed and bored by the work. I could not get a fix on what exactly they had to say, any ideas that existed were buried underneath extraneous graphics, I felt the typography was clumsy and the styles derivative. It was a good start though, they seemed like lovely guys, joked with the crowd and never stopped smiling and I knew better was to come.

Next up were Calvin Soh and Simon Oosterdijk from The Wilderness. The Auckland duo presented a mixture of client and personal lprocess driven’ work. Stylistically it was undeniably hip, each piece driven by a number of graphic ideas. They gave the impression of two dudes just doing there thing and openly stated that they don’t give a shit what anyone thinks, including the client, a commendable attitude! The work was good in patches, on occasion brilliant.

The most intriguing piece of work was a music video for Auckland artist Dimmer shot entirely on a Polaroid camera. It was a great idea executed well. The only down side was that the rebellious attitude of the designer and chosen style was suitable for personal work or the fashion and music industry, neither of these are great money spinners, This would turn out to be a theme for the day.

After a short break spent in the local cafes, we gathered again to hear Wellington based Post-production studio Oktobor. In their 10-year history, they have collaborated with Peter Jackson on the Lord of the Rings and worked with the cream of New Zealand’s advertising industry including Saatchi and Saatchi Wellington.

Marc Smith and Dean Lyon did not present a show reel of finished work but refreshingly focused on their design process. A mix of initial sketches, working diagrams, and helpful advice was eagerly digested the young audience. The snippets of finished work showed a diversity of styles, innovative use of technology, and commitment to doing great work for the client. Their presentation was a highlight of the day and confirmed my belief that Oktobor is amongst the finest creative studios in the world.