On April 17th, Salem Innovation Sessions was held at a club, Shibuya Womb, inviting an illustrator from UK, Pete Fowler who is well known for CD jacket design for Super Furry Animals and a figure series named Monsterism. This event invites hot artists from several fields every time. This time’s theme was “from still to motion”. 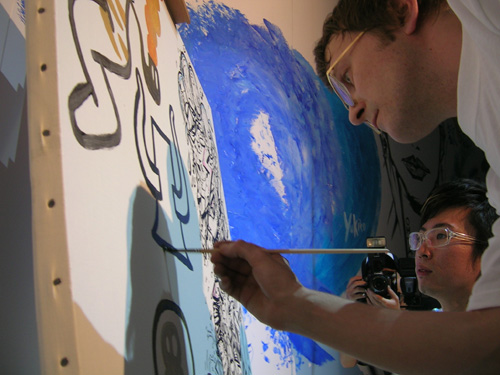 On the day, the venue was decorated with white canvases which surrounds the venue and on which participants painted on them freely. The event contents was gorgeous; there was talk session by Pete Fowler and live painting performance collaborating with Imai Toonz who joined as a friendship. With very cheerful and fan atmosphere, the whole event was good. Several days after from this event, I interviewed him about himself and his impression of this event.

Firstly, what’s your impression of Salem Innovation Sessions this time?

It’s fantastic. Really really really good. I mainly talked about my work because when I studied in the art school, we had a lot of artists visiting us and talking about their work. It was very inspiring. So, for me it’s important to talk about the work and meet a lot of people. It’s also inspiring to know how people think when they create something. 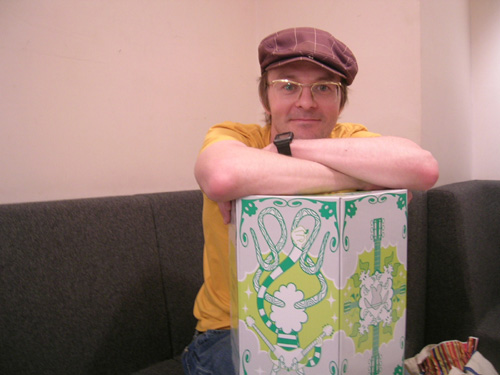 What’s the concept of the character design for Riki Stool which was in the venue?

The first step was to make what to do with my art work then I felt like making it looks abstract when people see it from distance. Another thing was to use Salem’s theme colour. Colour was very important.

What is music for you?

Music is really really important for my art work. It brings me big inspiration. I always work with music trying to mix my creation and music together. My taste is really wide and broad. I listen to a wide variety of music like Japanese Enka. I don’t have any boundary and division. For me good music is just good music. Music has so many different aspects so I enjoy it. 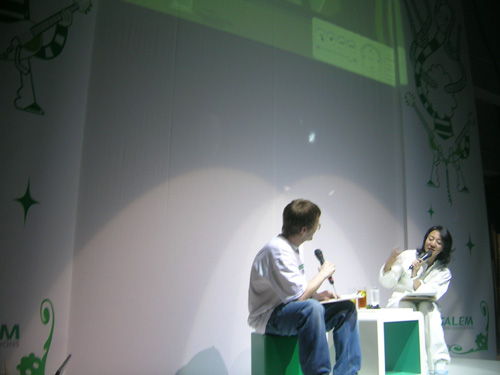 Could you tell me your current and future project?

Right now, I’m designing new twelve characters for Monsterism series. In the previous series, I designed seven characters. I’m also making a book and the concept is woodland. I’m making a large figure and one of the figure is really limited and we gonna sell it on my web site and in some shop exclusively. I forgot to mention one more thing which is a big project at the moment. I’m writing a script for TV series.

How do you create monster characters?

I’m into non-human characters. Moster can be anything. For me monster is very open and I can create a character that always what I want. Also there might be an influence from my childhood such as comic sor cartoon like UFO or Big Foot. That was always my fascination. People generally think monster is scary but I create monster which looks crazy but cute and friendly. They are actually like human.