I recently attended the third annual FlashintheCan festival (FICT), held in Toronto Canada from April 3rd to 5th. FITC stands alone as Canada’s finest New Media focused event. Spanning three days, the festival packed in a lot of speakers, with a wide range of expertise, from code to creative process. This year marks a slight change in direction for the festival, from focusing on primarily Flash and related technology, to including more design and creative based presentations. 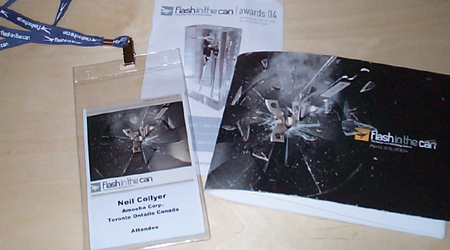 For organizational purposes, I’ll break this article into the three days of the festival.

The first day of the festival was kind of a warm up day, with only two things on the schedule, the festival award show and party. Both were held at the Spin Gallery on Queen west.

To start the day, I thought I’d register and pick up my festival ticket early. Festival registration was quick and painless. I stuck around a while to take some pics. 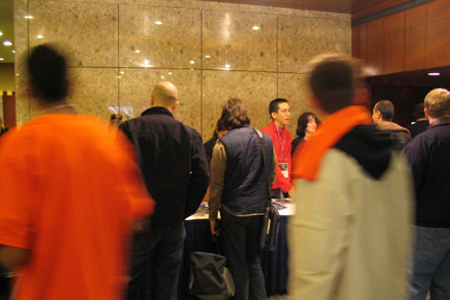 Since the Awards show was to begin at 8:00 pm, I thought I’d arrive around 7:30, and have plenty of time to spare to grab a good seat to enjoy the show. Wrong. I was unaware that the award show underwent a last minute location change to a smaller venue due to unforeseen circumstances. I almost missed the show since the gallery was packed with a near capacity crowd, which arrived early. Luckily there was space for a few more people, standing room only.

The awards were presented by the lively Hoss Gifford and the beautiful Amanda Walsh of Much Music. Both were excellent, although they displayed polar opposite presenting techniques. Hoss enlivened the crowd with comedic pot mouth styles, while Amanda took the high road, utilizing a straightforward, professional approach. 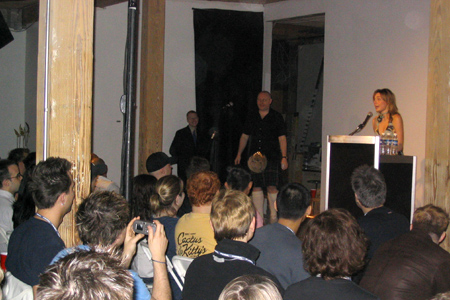 For the large part, the Award winners were strangely sedate. With wildly inspiring one word acceptance speeches like “thanks”, the show sped along at an unexpected rate.

A company called Play Airways created a number of short motion graphic bumpers as introductions for each award. Without a doubt, the graphically and conceptually interesting bumpers alone were worth the price of admission ($0 with a FITC pass, and $25 without one).

The party was your basic Shmooze fest with a dj. After a couple of hours I decided it would be a good time to go home. As I was Leaving, I ran into Andries Odendaal and had a riveting (inebriated) stream of consciousness, hour long discussion.

This marked the end of day one.