Luc Ferrari is a pioneer in the history of electronic music. Without his work many of the common properties of today’s electronic music probably wouldn’t even exist. Born in Paris in 1929 he began composing in the late forties and attended the Darmstadt Summer School. He took piano lessons with Alfred Cortot, composition lessons with Arthur Honegger and musical analysis with Olivier Messiaen. 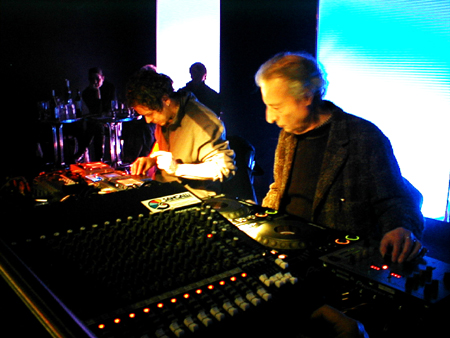 In 1954, Ferrari traveled to New York to meet Edgard Varese. He joined the Groupe de Musique Concrete in 1958 and collaborated with Pierre Schaeffer in setting up the Groupe de Recherches Musicales. Professor of Composition at the Rheinische Musikschule in Cologne, Luc Ferrari has won many prizes. The Karl Sczuka Prize in 1972 for Portrait-Spiel and in 1988 for Je me suis perdu, the Prix Italia in 1987 for Et si tout entiere maintenant and in 1991 for L’Escalier des aveugles just to mention a few.

He seems to be a mild, meditative man, with a wise smile. And he often laughs.
Tonight he played a 50 minute composition (where many parts seemed to be improvised) at Club Plastic in Milan, with Erik M. Before the concert the composer himself was very kind to answer a few questions. 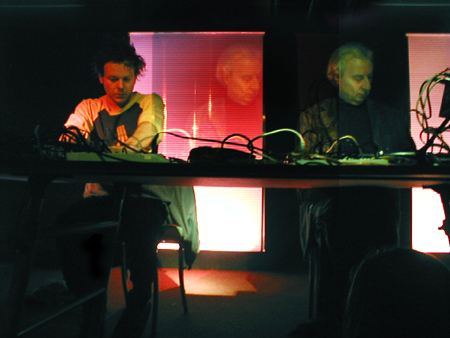 I’ve always had the impression that there are many different streams, concepts, intuitions and thoughts throughout the whole body of your work, a sort of labyrinth inside the multiple ways of conceiving music and composition. Is there one that you feel more important than others to communicate to a listener? Is there an idea that has obsessed you more than others?

I’ve lived through many experiences up to this moment. I’ve crossed half a century of history and I started composing in the fifties. In all these years I’ve listened to many things, from Jazz or popular music to what we call today classical contemporary. I’ve always wanted to do different things and every time I felt I was moving towards something that could be considered academic I would change the work and move in a different direction. I’ve always been very curious about what happened in the art scene and this sometimes moved me in directions that weren’t mine. I’m a composer of instrumental scores but I’ve also written electronic and Concrete works. I’ve always been interested in cinema and theatre, la mise en scene, the possibilities offered by the radio and what in the past were called environments and that today we call installations.

I’ve always been interested in things that weren’t directly related to my work: this is the reason why you can find many different ideas within my work, different styles, concepts, materials (smiles). 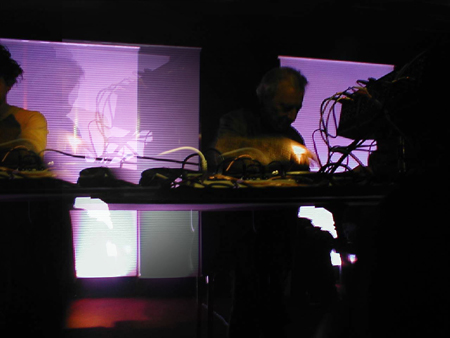 Musical photography is an idea that makes many different thoughts spring to mind. Do you consider a photographed sound a sort of map where one can find different directions?

Sounds exist within a psicological or social space, like the sound of everyday life… Back in the fifties I started considering things that, in those days, many didn’t consider interesting. This lead me to a music that was condsidered easy to make, while I was working within a music that could evoke images for the imagination (smiles). Music that could be considered anedoctical or narrative. All this can be translated into a autobiographical concept. When I compose a score I follow a chronological order, every composition can be read as a autobiography of a part of my own life.

I start recording sounds, as if the microphone was revealing to us what he’s listening to. Both the instrumental works and the electro-acoustic reveal details in which I’m only partially present. They are partial because I’m the one who’s listening but I’m also the one that’s writing.