For the last 10 years the 111 Minna Gallery in the SOMA District of San Francisco has been a center for art, music, film and nighttime leisure (read drinking and dancing). This is where the tragically hip and just plain tragic gather together in a flurry of studded belts, mesh hats, high heels, sweatbands and the occasional Dockers khakis, worn by the Yup who still thinks his “casual Friday” outfit is versatile enough to wear out at among the fashion Nazis. 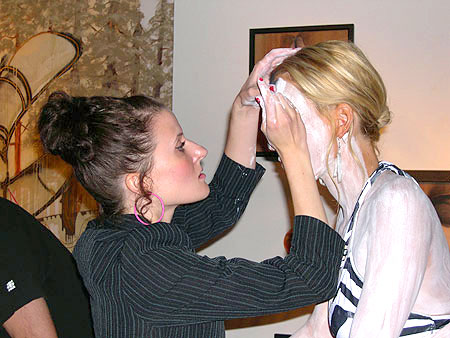 This was the setting last Friday (October 17, 2003) when Minna (as its known to those who know) hosted “Zoology,” a live art/fashion show. For this event, six artists (Eric Bailey, Heather Luque, Steve Saiz, Andy Howell, Josh Silveira and Nate VanDyke) were asked to paint the bodies of six women in full animal regalia-a giraffe, a cheetah, a zebra, a bird and a tiger. Fulfilling the fashion side of the show and serving as the artist’s… ehem, inspiration, Zoe of Zoe Bikinis supplied the women with some of her stylish handmade bikinis. 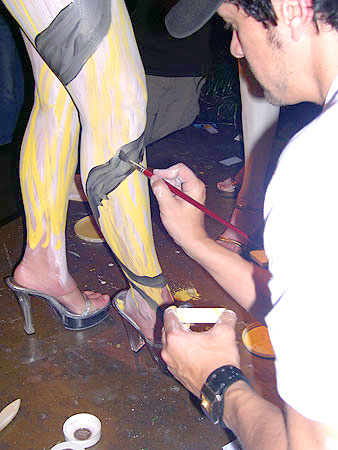 As the artists began their task of painting their appointed woman with a base coat of white, it became apparent that a few of the girls had no intention of letting the art speak for itself. With the platform high-heels and posing, at points I felt more like I was at a strip show than an art show. Hmm, I guess this show had more pluralistic intentions. Cultural significance aside, it was thoroughly entertaining. 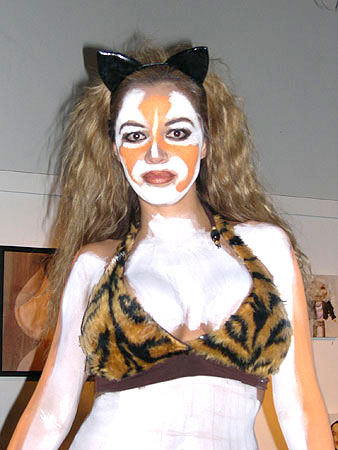 Once the masterpieces began to take form, what was most interesting was how the style of each artist translated to the media they were working with -body paint and the human form. It was almost like they were creating a living embodiment of their work-brush stroke, detail, line quality, color palette-the elements were all there. This was especially apparent in Eric Bailey’s cheetah and Andy Howell’s bird. Heather Luque did the most interpretive work; by the end of the show her zebra was covered with penis illustrations up and down her torso. 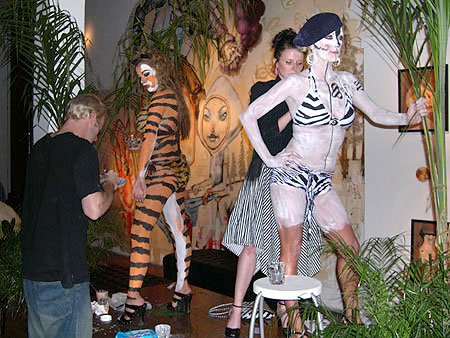 By the time the artists had put down their brushes and taken off their metaphorical berets, the crowd had swelled. DJ Satva was cuttin’ it up, most were dancing and everyone was having a good time.