Artist Dave White has given running shoe aficionados an opportunity to immortalise their favourite sneakers once they have worn away.

In a recent London exhibition named “Clash of the Titans: An exhibition of Nike and Adidas paintings throughout the decades” Dave displayed a series of paintings which depicted running shoes from the world’s foremost sportswear brands. The paintings focused on both cult and landmark footwear which has featured prominently in the company’s history and is adorned by sportspeople and street fashion wearers alike. 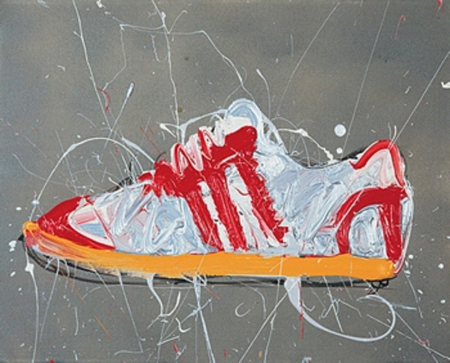 The collection, which has received both public and press exposure has already shown in the US at ‘Solded Out’ and can now be seen in Germany. Demand for the paintings from streetwear connoisseurs has led David to accept commissions from the public who are keen to have their favourite Stan Smiths or Air Jordans portrayed on canvas.

A fine art graduate from Liverpool, David has previously exhibited at both Sotheby’s and Connaught Brown gallery. He has a personal interest in sneakers and is a club DJ in his spare time. The paintings (as seen attached to this article) offer a different visual perspective on street clothing than is currently dominated by graphics and graffiti. 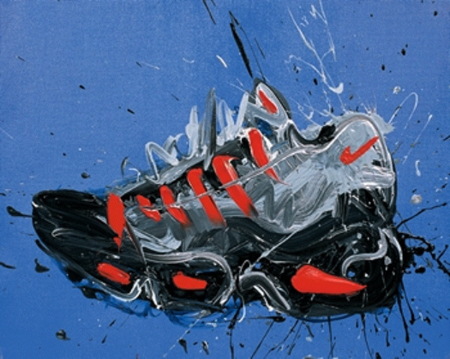 The work also offers an interesting viewpoint on street culture by using a medium often associated with tradition and establishment. We see a subject that is reported to be part of disposable modern culture, but in reality holds a great deal of relevance in today’s society.

Dave has had the opportunity to work on projects with both Nike and Aididas since the collection was made public. There will be some limited edition Adidas footwear available from Oki Ni in the near future while Nike have released a T-shirt from his ‘Air Max 03’ painting.