That time of the year has come around again- week worth of excitements on screen and penetrating experience with never seen (and would never see any where else) motion footages. Amongst all the celebrated film festivals out there, nothing is quite this innovative and transformative-welcome everyone, to Resfest 2003.

As festival director Jonathan Wells puts it, Resfest has been the showcase of the latest technology in filmmaking’ and in artist’s language. Many techniques have premiered on Resfest screen (Richard Linktaylor’s ‘Waking Life’ featured Resfest debut ‘rotoshop’ technique), and the festival has certainly provided the environment where all the world’s art directors are allured in to the audience seat. Other mixes in the crowd are art school students and all channels of creative types galore.

The opening sequences designed by different directors every year seems to be pursued in less and less show-offish manner and they let the beauty of minimalism speak. This year audience was greeted by the robot baby sitting in the lab. As if there was a surgical process required to make this baby’who seems to stand for films created by all the aspiring filmmakers out there. Technology now oh so handy, it has become indeed easy to make a film. It almost felt as if this opening sequence was sending this message out: ‘be responsible on your creation, its heart is beating, crying for attention.’ So immerse yourself into the ocean of creation, and embrace all the babies out there. Best of 2003 Resfest’ must see film picks.

The Winner of Resfest 2003 (Holland | 2003 | Dir. Johan Kramer)
Directed by co-founder of acclaimed Amsterdam-based advertising agency KesselsKramer (Kramer also directed ‘The Other Final,’ the award-winning documentary entered in this year’s OFF THE MAP program), this title gives a perfectionist framing of this character at a loss in its own inspiration and ambition. The contrast of character’s color distinct outfit and the gloomy Dutch sky adds a charm in storytelling, and keeps the audience’s attention in tact. Good example of inner thoughts taking you miles beyond your realm and yet allowing one to land safely on ground. 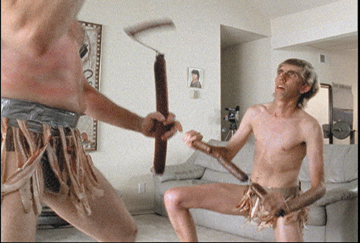 Salami Fight Association (US | 2003 | Dir. Douglas Avery)
Who would have thought that bacon could be this sexual? Obviously Avery has. The medium built red headed man enters the non-distinct suburban apartment with supermarket bag in his hand. Pack after pack of bacon comes out of the bag, and every man’s fantasy tool duct tape also enters the frame. Then what happens? The greasy bacon is neatly taken apart and one by one stapled onto the duct tape strips. Next moment you realize, the man enters the frame with this bacon frilled bottom fit around his waist. Horrendus sight gets enforced with his parphinelia’ a thick firm stick of salami, actually two of them connected, used as a harmful tool to beat the counter part. His skinny fighting pal stirs up the oddity of the situation and the climax comes when he reveals the meatball full of attashcase. No further explanation should replace the impact of meatfull frames, I hope you enjoy this piece of entertainment. 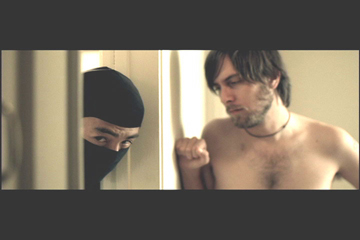 Ninja Pays Half My Rent (US | 2002 | Dir. Steven K. Tsuchida)
The fascination that accompanies Ninja is beyond Japan’s imagination’ the supposedly native land of this historical yet mysterious figure. This is a play on the stereotypical idea of Ninja and never ending search for the ideal roommate. Many things happen behind the closed doors. After all, the ideal roommate might be that someone who is there, but only leaves slight proof of its existence. 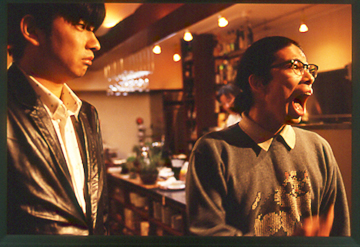 The Japanese Tradition: Relationships (Japan | 2003 | Dir. Namikibashi as Junji Kojima & Kentaroh Kobayashi)
The return of the favorite duo was greeted with applause. Their ‘The Japanese Tradition: Sushi’ won the audience awards last year and also made it into the DVD ‘best of Resfest #3’. The tradition of far east explained in a whole depth and with a native’s very own wit. Tons of play with motion graphic techniques accererate the comical statement and leaves us with nothing but joy. Finally someone was able to take themselves not too seriously. Bravo to Kojima (teevee Graphics)’s aesthetics and sharp sense of humor. 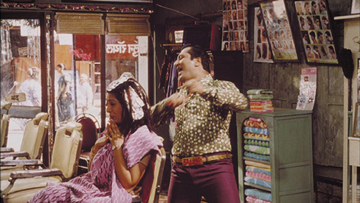 Mulit (US | 2003 | Dir. Ivan Zacharias)
Hollywood catching up with Bollywood- it is a beauty of production and choreography (good old storyline sang and danced in full emotion) that swipes away your mind first off from the obvious intention of Zacharis’. America’s all time favorite mullet rooted in the sad love story of inter-class affair in Bombei. After all, the true aesthetics of that sacred hairstyle can only be explained in the trans continent channeling.