The couple Bea Demel and Carsten Voeller started their own multi-media agency sometime ago. Bea studied graphic-design and didn’t want to work in an agency. Carsten formerly was an industrial-programmer and decided to learn web-related programming. They named themselves Element Weiss. 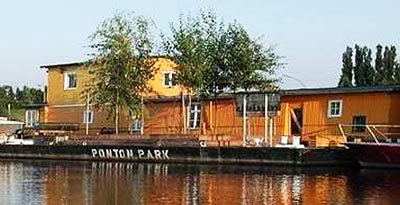 This year, they decided to leave the city and moved into a houseboat, which is lying in Hamburgs “free-hambour”, a fenced area of the harbour without costoms-duty. They’re docked in a peaceful basin surrounded by a dike, a warehouse and some more boats. The houseboat itself was built in 1924 and was the office-building of a company that moved the shipping goods from the ships into warehouses with smaller boats (that was before containers came up). 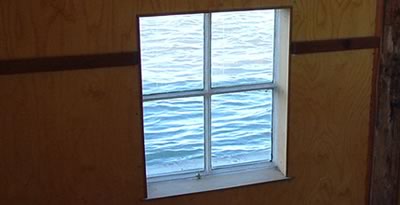 It has 110 squaremeters living-area. On the first level there are 3 rooms in a row. First is the atelier, with windows on 3 sides, wooden walls and a quite high ceiling. Through a door you can look at the water. The second room is a cozy kitchen followed by a small living-room. A staircase leads to the sleeping-room which is on top of the living-room. When I was there, the lamps were hanging crooked from the cieling because the boat touches the ground when the tide is low and slantes. Funny about that is, that you don’t realise that it’s the boat that slanted and therefor go crazy with the crooked lamps… 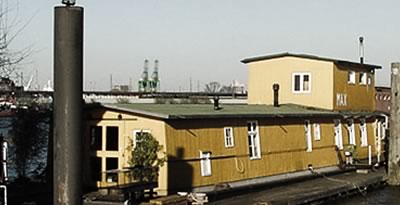 Boat-live seems to be idyllic but not that easy: they have to care for oil and water consumption. There is a water-tank of 2800 liters and an oil-tank of 1600 liters. A boat is coming quite regularly once a month, and if they’re unlucky they can’t take a shower anymore. Heating is a problem too, because the walls aren’t isolating well and the water leads the coldness directly to the house. That’s why Bea and Carsten tried to make a deal with “Odlo”: a range of thermo-underwear in exchange for a website.