“The Sine Wave Orchestra” (following S.W.O.) which make the sea of sine waves, under the rule -one sine wave for one participant-, was held at Design Gallery, Hachioji Campus of Tama Art University in 4/18 with 40 or more sine waves brought by participants.

Following Kichijoji and Nagoya, “S.W.O.” happens for the 3rd time. This time, in addition to the sea of a sine wave, following 3 units, “oscilloscape” by Akihiro Kubota, Soichiro Mihara, and Satoshi Yashiro from Tama Art University, KU/MA leaded by Christophe Charles from Musashino Art University, and “The SINE WAVE QUARTET” (following S.W.Q.) which consists of core member of “S.W.O.”, play simultaneously. 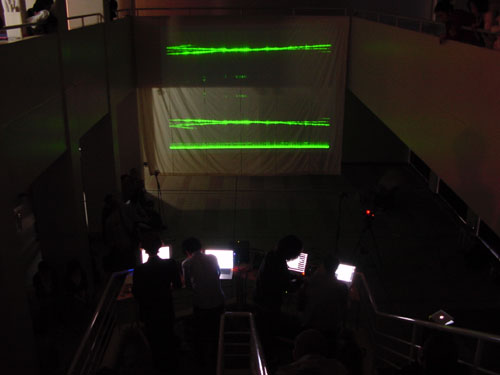 Sine wave cannot be overlooked when considering sound. It also exists very closely to our everyday life as electric current flows from a wall socket. In “S.W.O.”, each participant takes out their own sine wave and aims at transfiguring the space using the rule one wave, one person, one speaker. 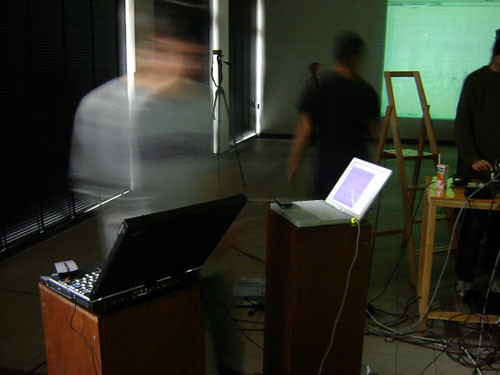 Twilight visited after the explanation of the event outline by Akihiro Kubota and the performance of “oscilloscape” started. At the hall where the laptop screen was projected, their performance wove in the pulse and the noise. A student who just entered this April listened to their performance attentively, pressed down an ear lightly, and was surprised. 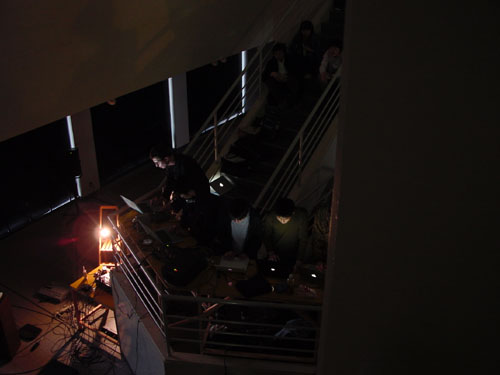 Then, in the performance of KU/MA leaded by Christophe Charles known for the collaboration with “Oval” etc, sound of the precisely built sound lets out from five Mac was able to be heard. In continuing performance of “S.W.Q.”, in addition to Mac, the analog oscillator is used. Similar to “S.W.O.” they play only sine wave, and under performance, the spectrogram which visualized the sound had projected on the hall. 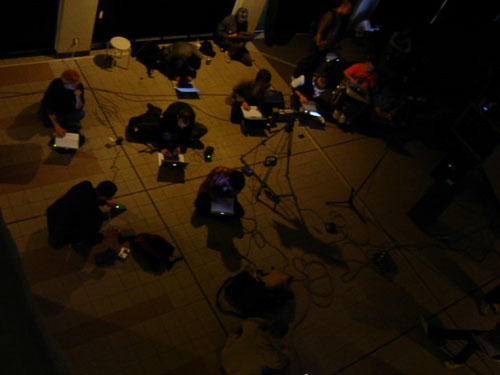 After the signal by the projection, “S.W.O.” started calmly as if it succeeded the performance of “S.W.Q.”. The number of sine wave emitted from analog synthesizer, handmade oscillator, and laptop etc., increases gradually. In the sea of sine wave, participant who was sitting down at first, intently began to walk along laptop in one hand. They showed mutual screen each other, brought each speaker close to close to their ears and perceive a gap of frequency. For a little less than 1 hour, the communication by the sine wave had realized there. 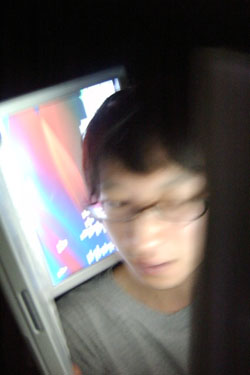 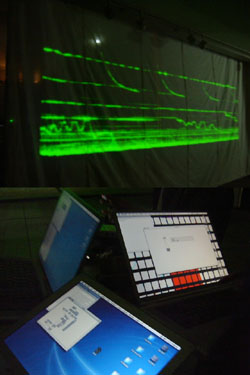 “S.W.O.” which gives completely different experience from a certain laptop live performance which sometimes falling asleep. Holding in Paris is scheduled for June 17 next time. Moreover, holding in Kyoto will also be under examination in July. If you interested to “S.W.O.”, surely access a website and to check a schedule!