For now the Docor Squat is in the guts of Koreatown, on that stretch of Western, just to the south of Melrose, that is lined with furniture stores and long buildings that have no windows at street level. If you happen to drive by on any given night and see a little pocket of noise and activity on the west side of the street, at a building that appears not to be zoned for human habitation, you’ve probably found it. Park your car and walk up the stairs to witness a scene straight out of the Decline of Western Civilization. It’s worth it, and it won’t be there for long. 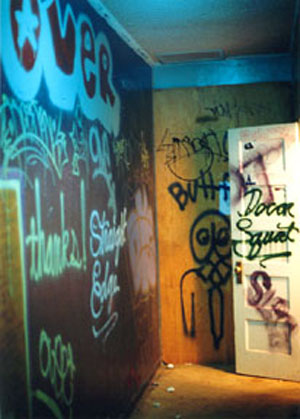 For my part, this was the first squat I’d been to. It didn’t disappoint. There is makeshift furniture. Graffiti covers the walls: anti-corporate slogans, lone obscenities, the eternally funny balls-and-shaft. The words ‘straight edge’ are painted on a wall in front of a garbage can spilling over with Old English bottles and Taco Bell trash. And most important, there are the kids. From what I could gather, there are four full time ‘tenants’. The rest are friends, random people off the street and those who heard there was live music. 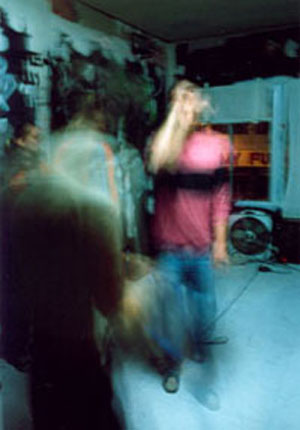 Johnny B.A.J. lives and often performs at Docor. His music, a blend of spastic hip-hop lyrics and D.I.Y. beats, is performed while riding around on a skateboard. In the meantime, the members of a two-piece band called Queef are getting ready to play, plugging in guitars and amps. Four bands will
perform tonight. True to punk sensibilities, there is no stage. 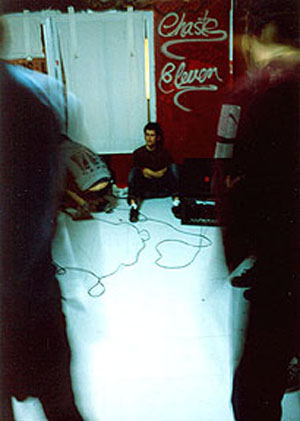 Somewhere in his twenties, soft-spoken with a pleasant demeanor, B.A.J filled me in on the history behind the squat. The place used to be home to two or three junkies. At some point they stopped paying their rent. When the junkies were evicted. A bike messenger friend who had his ears to the tracks heard about the vacancy and informed B.A.J. and gang, who moved in, skipping the application process. At first, the owner, a Korean gentleman living downstairs, tried to kick them out. Despite the fact that they offered to paint the place, the owner became increasingly rude. He was chased back downstairs, and there were no more run-ins. But not long after there was an eviction notice posted on the building. It takes a couple months for the eviction process to work, so for now the bands play on. 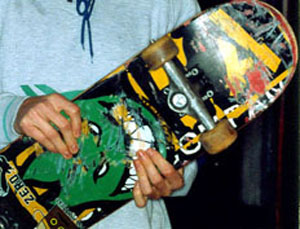 Docor’s days are numbered, but everyone there seems to be all right with that. They live in the present. And for now there is a fun place to kill an evening in K-town. Johnny and friends don’t have to pay rent. Bands that would usually play at the Smell, a downtown club that just got shut down, have a convenient and hassle free venue. And they pretty much trash the place… until the ball drops.