A major retrospective of Damien Hirst is currently showing at the new Saatchi Gallery, which opened its doors to the public on 17th April 2003. The gallery is situated on the first floor of County Hall, (renovated by architect group RHWL) covering approximately 3,000 square meters. The central location of the County Hall (between Tate Modern and Tate Britain), makes it ideal for the gallery’s aim to promote Young British Artists (YBAs) to a wider audience.

Saatchi is known for his vast collection of contemporary art, but more notably for the works of the YBAs who took central stage in UK art during the past fifteen years. Inside the gallery, the works are strategically placed to deliver the most impact. 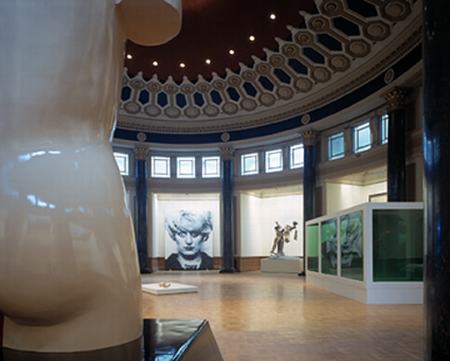 Damien Hirst, Hymn (1999-) and The Physical Impossibility of Death in the Mind of Someone Living (1991)

The Damien Hirst retrospective is not showing any new work, nor is it presented as a show on its own as one might expect. Instead, his larger work, such as ‘Hymn’ (1999-) (an enlarged anatomical model inspired from his son’s plastic toy) stand alongside works of other YBAs, such as Tracy Emin’s ‘My Bed’ (1998) and Marcus Harvey‘s ‘Myra’ (1995) in the main circular room. ‘The Physical Impossibility of Death in the Mind of Someone Living’ (1991) (more simply known as ‘the shark’) looms in the middle of the room, and is visible from the far end of the corridor as you approach the circular room. Since its first showing in 1992, the shark has often had been reported as ‘decaying, disintegrating and showing the progress of time’ but here it has been restored and cleaned up.

Many of these works have been seen previously during the past decade, most memorably in the ‘Sensation‘ exhibition at the Royal Academy of Art in the summer of 1997, which attracted a record-breaking 300,000 visitors. 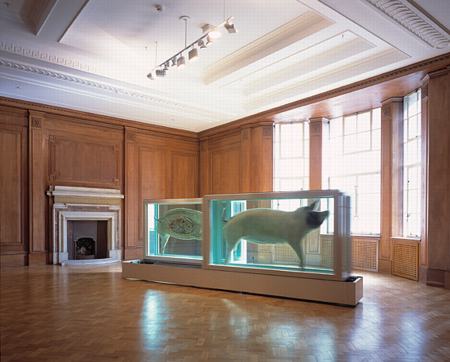 Outside the circular room, one can explore and discover more of Hirst’s work, each presented in numerous smaller rooms that run along the corridor. These rooms also feature oak paneled walls and in some cases, fireplaces. Spin paintings such as ‘Beautiful, kiss my fucking ass painting’ (1996) are oversized and seems uncomfortable in these rooms where the viewer only has enough space to stand back and acknowledge the work, not really appreciate it; ‘Horror in the Home’ (1995) is a giant ashtray holding thousands of stubs and empty cigarette cartons; more dead animals in formaldehyde, such as ‘This Little Piggy Went to Market, This Little Piggy Stayed Home’ (1996) (a pig sliced down the middle, displayed in two separate tanks) and ‘Away from the Flock’ (1994), a sheep, looking happy and satisfied. In fact, the sheep is one of the better integrated with the size of the room, not too small, not too large and oddly but perfectly complementing the fireplace. 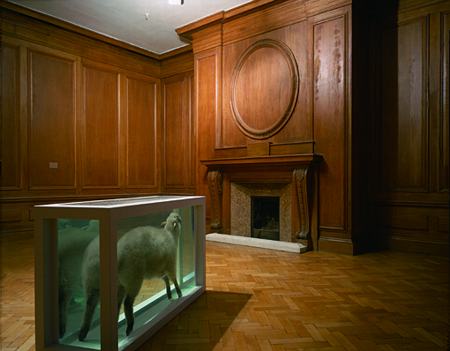 Taking a detour from the Hirst exhibition, the Boiler Room shows work by new and upcoming artists. The whitewashed walls of this room are reminiscent of the old Saatchi Gallery (in Boundary Road, north-west London,) which was itself stunning in all its glory. It is as if showing in a whitewashed setting is the gateway to success and the Boiler Room serves that purpose; new artists have to prove their work can stand on their own before being ‘upgraded’ to the oak panels and fireplaces.

The local media reports that Hirst is bitter at Saatchi for holding most of his work; he wishes to see more of his work in Tate Modern, which currently houses his large installation ‘Pharmacy’ (1992). Indeed, it was reported that the two central pillars of the Saatchi Gallery, Charles Saatchi and Damien Hirst (apparently holidaying in Mexico) were absent from the opening party, which hosted a number of famous faces. (Even though it was Saatchi who commissioned Hirst’s ‘shark’ back in 1991. A case of the shark biting the hand that feeds it?)

The Damien Hirst retrospective continues until 31st August 2003. If you missed his work the first time round, why not check them out now?