It was Francesco Bonami (currently a senior curator at the Museum of Contemporary Art in Chicago) who, some ten years ago now, described painting as a nutritional building block for a healthy visual diet. Whether you are a painter or an artist/designer dedicated to emerging technologies, painting – according to Bonami’s essay “Vitamin P: The Sound of Painting” (Flash Art magazine no. 173) – demonstrates the primacy of renewal and tradition over against perpetual novelty in the creative arts. 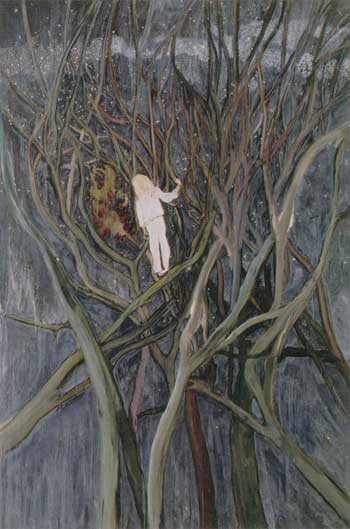 Much discussion of painting has centered around its supposed opposition to mechanical reproduction, especially in the form of photography. Photography, it has often been thought, if valued above the unique art object-as-commodity, would effectively undermine much of the untoward elitism pervading the art world. Painting, though, has demonstrated a remarkable resiliancy in its ability to embody populist idioms in traditional form.

The Scottish-born artist Peter Doig’s paintings, currently on view at the Arts Club of Chicago (through April 12th), succeed by effectively inverting the strategy which make Murakami’s work. While Murakami’s technique revives an old form with an infusion of contemporary content, the very traditional subject of Doig’s paintings -they’re almost all landscapes- is given new life through a relentless varying of style which could really only be imagined after an era of appropriationist referencing had run its course. 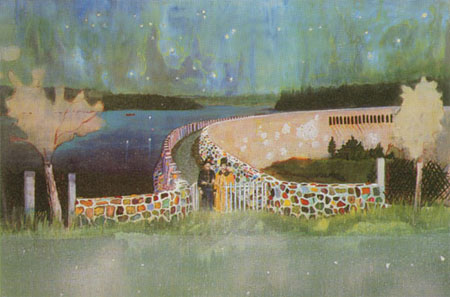 Running through the twenty-seven works on view at the Arts Club is an understated sense of abjection of the variety expressed without quite as much nuance in the art of Sean Landers and Richard Billingham both artists whose rise to prominence came at the same time as Doig’s in the 1990s. The large painting Gasthof zur Muldentalsperre (2000-2002), for example, features the two costumed figures sporting theatrical mustaches who also appear in two untitled works on paper (both 2002). These guys, in their clownish period costumes, along with the brightly colored wall and funny little soft paint smears-for-trees flanking them, seem to be unselfconsiously suggesting that much of what has passed for the profound and meaningful in large-scale history and metaphysical landscape painting in the modernist tradition is little more than sad joke. This sense of high-irony, conjuring up a wonderfully affective bathos, persists throughout Doigs paintings. The overarching sensiblity being that just by encountering the painted surface, we’ve taken our vitamins. Now, in the face of a nonplussed encounter with history, we might as well take some rest, making an effort to relax and enjoy ourselves. 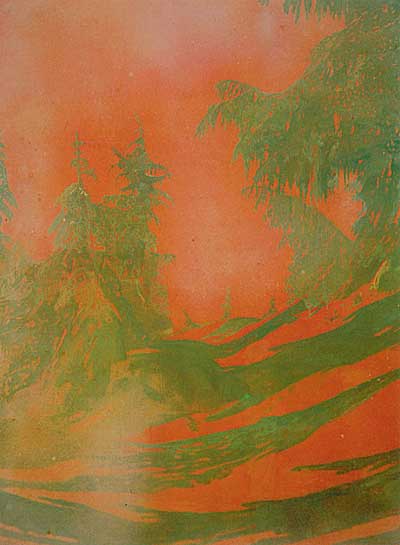 None of these ideas are new, but Doig appears to be emerging from the caucophony of voices who began championing this sort of “dead-end, but…” post-modern abjection in the ’90s. His large-scale paintings (most about 200 x 300 cm) really are a joy to look at, swallowing the viewer up in brilliant colors and blurry, half-remembered dreams. Often Doig allows a wash of color to hang up as it will across the canvas, creating a spotty, mildewed appearance which only adds to the sense that what we’re seeing has been muddled and distorted through the lens of subjectivity, memory and formal mediation. These are smart, good-for-you paintings; serious in their considered approach and awareness of their medium, but never merely pretentious for the sake of it.