Every March 21st, my calendar proclaims, “Today is the first day of spring!” but I find it difficult to suddenly switch my seasonal sense. However, this year spending the day of the Vernal Equinox with artist MARCH21, who was born on the same day as spring, stimulated my hibernating sense and made me feel spring-like. He created for me” a fresh season of adolescence,” a feeling of new buds sprouting up. 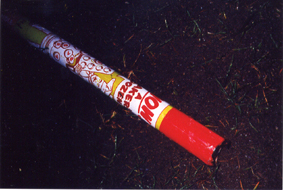 Artists MARCH21’s opening reception for his exhibition titled “The Theme for Tonight” was held at the Tracey Lawrence Gallery on 21st of March. MARCH21 is a Vancouver-based visual artist who is active as a filmmaker, music producer, and DJ. He makes art from the perspective of youths on the topic of anarchic young boys’ activities.

The exhibition includes a video installation and blueprint drawings. They illustrate antisocial teenage violence, mostly done by young males, based on the relationship between the public and the artist’s personal experience.

The blueprint plans are drawings done by 14 year-old boys that MARCH21 randomly close. The prints refer to the book “Anarchist Cookbook” published in 1968. The plans by the boys illustrate youth activities of destruction and collapse-the fantasy of building blowing up and school rules being broken. MARCH21 seems to capture for the public the beauty of youth, yet it is obvious that this time of life is limited and fragile and can’t be returned to. However, the imagination of these boys’ is unlimited and reckless. Even though their ideas are impossible, they reflect the vital spirit of youth. The disorderly, antisocial drawings are put up over the wall. A video installation shows the violent activity that the young actually carry out. The image projected on the front screen is a school, project on the opposite screen is a young man firing a Roman candle towards the school. The audience is sandwiched between the screens and watches the whole scenes as they are looking back and forth. A relationship is created between the public and the youth’s activity. The viewer becomes interested in getting a kick out of watching risky and crazy activities that young boys plan, but they don’t really want to get involved in the situation. 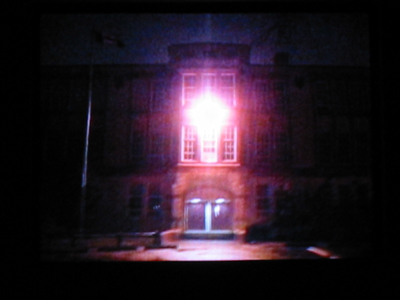 Youth activity is under constant surveillance. Their plans seem to restrict their own activities in public, but many of their plans can be seen as just fantastical and anarchical thoughts. Challenging and provocative attitudes of youths will appeal to the public differently because of the different perspectives that the artist presents. Especially during the gallery opening when there were a lot of young people, the whole violence didn’t seem like such a big deal. This makes me feel strange and uncomfortable. MARCH21 makes it possible to recreate a sense of being young by reflecting on his own experience. 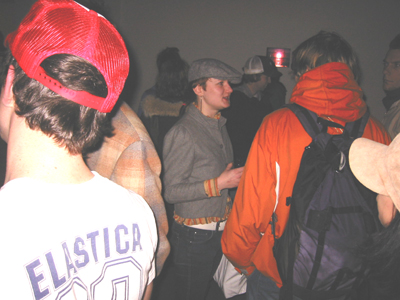 A lot of people who were gathered at the opening wanted to celebrate MARCH21’s birthday and followed him to the nightclub SHINE where he spins on Friday nights. I was one of them, I’m glad I went because it left me with the joyful feeling f the new coming season-one I hope stays with me until next March21.