This is just a personal thing but I do not like to be surrounded by unnecessary things. A jumble and messy room looks bad and I feel refreshed in my mind and visually by throwing things. However, it is true that I keep some things, which seem to be used again but I have no idea how I can use them. Growing up in an affluent society might be the reason why I do not know how to move forward. Creativity might have been sharper than now when there were few things around people. I sometimes turn it over in my mind. 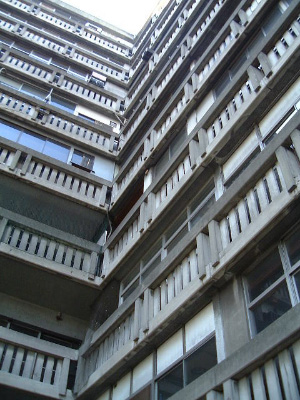 “R-project” is a changing urban life project started at the end of last year by creators and support from “IDEE“, a shop that deals with high-end furniture and interior goods. This project was introduced at “Tokyo Designers Block 2002” held this October. “Recycle”, “Redesign”, “Rethink”, “Refine”, “Restore”, and “Recreation”… You might have had several chances to hear these words recently. “R-project” is a symbolic name from these keywords. Creating simple space and things by putting ideas and sense into existing things without spending a lot of money. It was a matter of course before our society became such an affluent one. However, today, we are seeking after new products only, and we now feel something like “something’s wrong.” In “R-project”, the creators have many attempts to sort this feeling out with their imagination and activities.

“Aoyama Mansion”, which faces Aoyama Street, was chosen as a venue for this project. Eight years have already passed since the building was in ruins. Introducing this project in this type of building is convincing, and until I found a shower room or a water tap, I totally forgot the fact that “people used to live here”. In other words, the space there was full of artistic colours. Also, what living space can be an artistic space made visitors to enjoy art freely and it created a relaxed atmosphere there. I was happy with having friendly and clear explanations by artists as well. 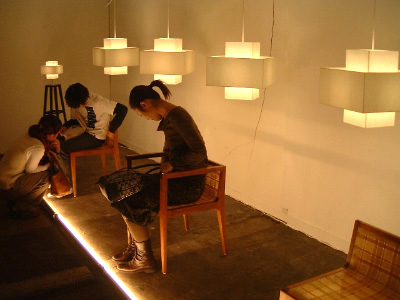 These square-shaped lamps are the work of Mr Katsuya Iwamoto from “Embody Design Association” based in Osaka. I felt a warm atmosphere from these lamps. The chairs under the lamps are also his works, called “The eco-chair”. Contrary to the semitransparent-stiffed appearance, it was quite comfortable to sit down on this chair. According to Mr Iwamoto, the seat is made from natural material, Resin, and it slowly fits the shape of the users’ body. The thickness of this material is only 6mm. However, if it were thicker than 6mm, people would feel pain in their bodies. If it were lighter than that, the chair were not strong enough to hold the weight. This is the best thickness, which is also appropriate for absorbing impacts.

This room, which faced a courtyard, used to be a beauty salon, and architect unit “LOT/EK architecture” was having their exhibition here. New York based “LOT/EK” consists of two Italians, Ada Tolla and Giuseppe Lignano and it was the early 90s when they started to work as “LOT/EK” in New York. Since then, they have been creating various architectural designs, from a student pavilion, art museum to shops,with their original and outstanding senses and ideas. Luckily, I was able to see Giuseppe at this mansion and had a chance to have a little conversation with him. 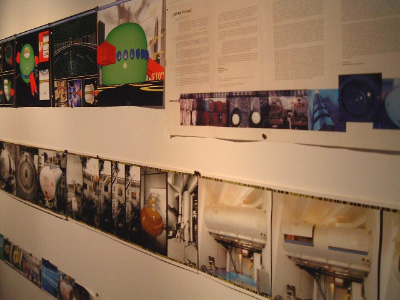 “LOT/EK” is the most notable architectural unit at the moment. Bringing a container or an airframe of a jumbo jet into a building is a big surprise for us and it is natural that people pay keen attention to the unit. Their past projects are introduced in their site with some photos and you can have a look how the container was brought into the building. I was a bit nervous to talk to Giuseppe, because I had no idea what sort of person he is. However, he is a clean gentleman with a nice smile. 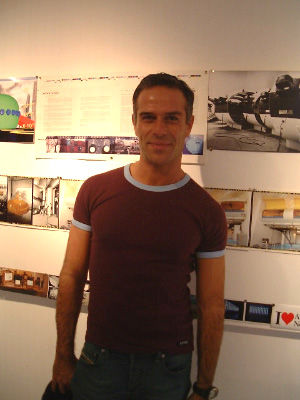 I need to go back two years ago, in order to explain what brought “LOT/EK” to participate in the Tokyo Designers Block. When independent curator Ms Harada went to Los Angels, she came across LOT/EK’s video exhibition and their friendship began. Giuseppe told me that it was the first time for them present their works in Japan. “Tokyo is very exciting and crazy! I love the city and hope many people in Japan have a chance to look at our works!”, said Giuseppe.

According to him, the idea about the exhibition in Aoyama mansion came out in an unexpected situation. When he was talking about the concepts of this exhibition with Ms Harada at a conference room, his eyes were caught by posters linearly pinned on the walls. He put the photos of their works in the same way and it looked nicer than he thought. I felt like going on a trip of their works as I looked the photos around. Expensive frames and special light installation are unnecessary. The way of finding a new sense with the situation where he was is in common with the one of “R-project.”

From beginning to end, Mr Giuseppe Lignano friendly explained about their works. “LOT/EK is re-inventing domestic/work/play spaces and functions and questioning conventional configuration, and blurring the boundaries between art, architecture, entertaiment and information.” I felt this from this energetic creator. 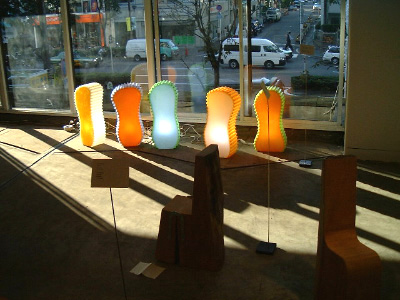 The exhibition called “Contemporary Israeli Design” was also held in this mansion. The space was full of colouful and pop works – more than I expected. My knowledge about Israel was poor but I had an image that people in Israel have got less freedom than we do. Therefore,looking at a star-like lamp made with steel sticks and plastics by Raviv Lifshitz and a chair, which can be a square pillar once it is folded, from Yaacov Kaufman striked me as a fresh thing.

The aim of “R-project” is to create more design-oriented situations in “R” activities. Using the same thing for a long time makes us feel easy. Fondness and the potential value of it will increase by adding ideas to make the contents of that product better. The forefront is not the best at all times. I agree with the movement’s aim to use existing things as best we can. I hope that we will have many opportunities to see “R-people” and “R-designs” from now on.