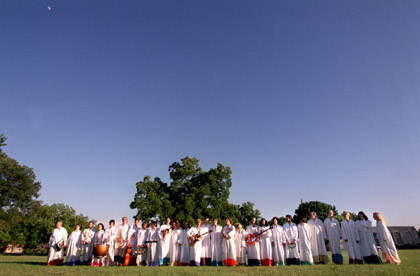 Polyphonic Spree are very unusual. Comparisons have been made with early Mercury Rev and The Flaming Lips but that just doesn’t do them any justice at all and certainly doesn’t capture the mood of the band. For me they’re more like the kind of outfit that Brian Wilson would have loved to be in, if he hadn’t been doing his own thing. They’re clearly deranged, but in a bright-eyed wholesome way. Their music is spiritual without being overly cloying and I’m pretty sure it is Christian, although they avoid the use of the God word at all costs. It’s too easy to see them as freaky, one-trick ponies, but I think they could be much more than that. What comes across so strongly is their belief in what they’re doing, why they do it, and each other. In the depths of London’s jaded, cynical, post-ironic new-new-new wave pop culture they shine like crazy diamonds, high on life and each other.

The project is the cosmic brainfruit of Tim DeLaughter, (I really hope that’s his real name) and around him he’s collected 26 other white-robed people to join the mission and come along for the ride. The collective is a multi-faceted and multi-instrumental musical beast of a many heads and what seems like a hundred leaping legs. Any given song inevitable features a towering melange of sound. Trumpets answer Flutes, Trombones dance with Moogs while the Bassline reaches out to grab you. Everyone is singing, all the time, hands in the air and jumping, so much jumping. The lyrics are typically simple exhortations, cannoning mantras of hope and solidarity. There’s a palpable sense of achievement in even getting this many people on stage without it sounding like a post-modern take on the noise sculptures of Fluxus, it works. It’s dynamic and powerful and lifts you from the commonplace. What more could you ask of any live experience? If I had one complaint, well…there could have been more hats.

Experience is the word to use here. The idea of “Seeing a band” just doesn’t do it any justice, I’ve not heard the recorded stuff but this is something that lives for the stage. It’s unfussy and simple, occasionally it felt closer to a Broadway revue than a rock gig but who cares? It’s genre-defying, different, bold, and most importantly they’re getting away with it and gradually making their way around the planet garnering fans and friends as they go. I hope they become as globally huge as they deserve to be.

As Tim took to the stage to open the show he told us about his vision for the band. “This isn’t about being the best musicians in the world, this is about being able to express ourselves through music.” Say it all really.

Go and see them live. More fun than joining the Moonies and less damaging to your social life.

Text and Photos: Alistair Beattie from Me Company