I understand design to be more as graphic design. I see design as an attitude and as a understanding. Therefore in Berlin, where graphic design or outstanding advertising just is not, I would like to concentrate on the ‘things that surround us’ – things which I believe make part of living in this city exciting. 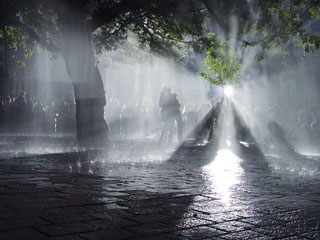 Berlin seems to be systematically ignoring = destroying its past, its being replaced with the quick and the dead, the bad and ugly. and if the content doesn’t help at least good design will make it sell better.

The coolest thing I’ve seen lately is a open-air installation called “Das Wunder Von Berlin” (Miracle in Berlin) from the Dutch artist Iepe Rubingh. Its a big tree in front of the subway station Hackescher Markt. Its a big ash tree and under this tree it rains, irregularly and when it does it rains alot. Warm and wet. Watching it is like a puzzle for the viewer, its very bizzare on these hot hot days and nights that the object of nature – the tree which should protect us from nature the rain. Good fun. 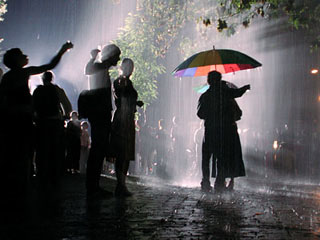 The installations opening speech, found in German the website, comes from 4 directions – the artist, the professor, the bischoff, the actor – art, science, religion, entertainment.

No one admits to being responsible for the work, no one knows and no one cares, its simply dismissed as a wonder, more interesting are the sponsors of this work, here comes the rain thanks to the Berlin water works… and the webcast sponsored by a local telecommunications company. What it here boils down to, is that miracles do exist and wonders are to wondered and here in Berlin there is definately enough to do.
In a city that is Bankrupt, not only very exciting but also very inspiring. I don’t see dead ends, I see chances.