We are in the time of digital media. Designs, movies, music… Creators are now able to create anything with a desktop. This is fantastic progress in terms of “efficiency” and it makes me feel the future is waiting for us with good things. However, are all aspects of digital media really good? 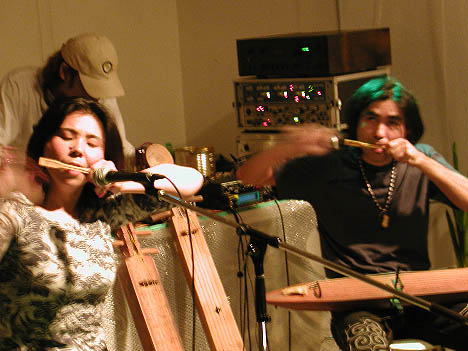 Dot Soso hit its third time. This is a monthly creative DJ style event by inviting various types of guests at “Soso Cafe,” produced by Shift. Asahikawa City-based musician Oki Kanou, who is descended from Ainu, had a concert and Sapporo City-based furniture designer Nanae Hara‘s furniture was placed. As usual, Nordform Crew directed the lounge-like space with the electronic taste. 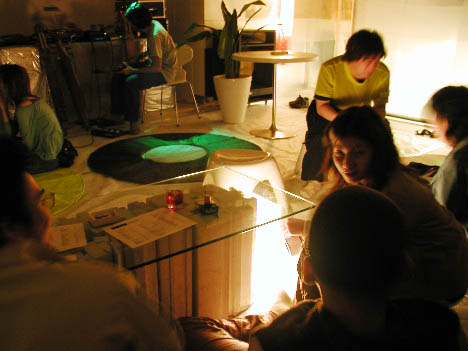 Audiences were asked to take off their shoes at this time. Going through the tunnel with vinyl curtains, there was a concert space. No chairs and no tables. People were sitting on the floor that was covered with a safety vinyl sheet. A comfortable and pop atmosphere was created by using with the vinyl products in various ways and Nanae Hara‘s original carpets “Yen mat” and “Locking chair.” A club space tends to give you a feeling of coldness but this venue was not like that. I felt a warm and tender atmosphere there and the audience seemed to be enjoying drinking alcohol, having meals, the electronic DJ play and chatting with friends. 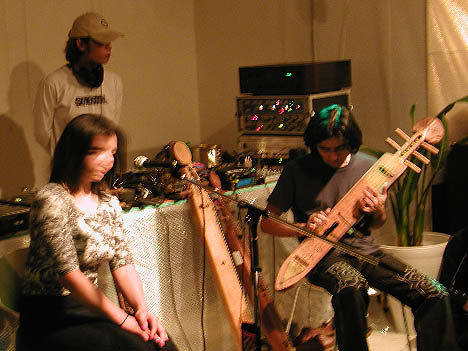 Oki Kanou appeared in front of a DJ booth after 10pm. I would like to briefly introduce his history here. After graduating from Tokyo National University of Fine Arts and Music, he went to New York and had been taking part in film making there. Now, he holds concerts as well as writing picture books as a part of his artistic activities. If you want to find out more about him, please visit his website. I felt the same atmosphere from him as we have as well as friendly atmosphere even though he was in an ethnic costume with a beard. Also, I felt a special aura from him as an artist.