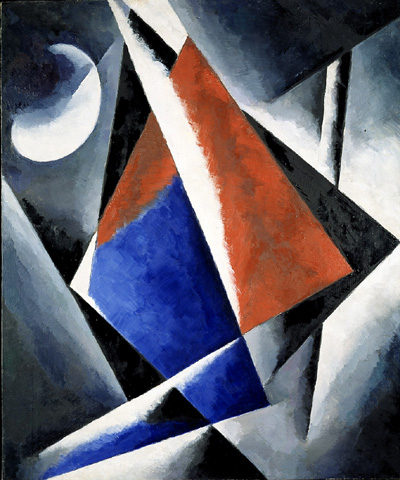 Is art made by women different than the one made by men? An interesting question that the State Tretyakov Gallery examines in their recent exhibition. In the building dedicated to modern art on the Krymskij Val, overlooking Moskva River just opposite Gorkij Park, the current temporary exhibition takes a stroll through the centuries, focussing on women artists. It is actually the first attempt to introduce genuine women’s art from as far back as the 1400’s to today. The exhibits cover a variety of traditional and modern mediums ranging from painting, graphics, decorative arts and installations. It thus has historical as well as contemporary character, looking at the specific development that women artists took and still face today.

Coming up the vast staircase, passing by the fabulous model for the Monument for the Third International by Tatline, we turn to the left to the Temporary Exhibition hall. The Tretyakov’s permanent collection one floor higher is worth a visit itself: It houses many icons of modern art, the most famous of course being the Black Square by Malevitch, and as it aims to encompass the whole of the Russian art of the 20th century, for the first time not distinguishing any more between pre- and post-revolutionary art, it creates an artistic continuum free of ideological barriers.

Plunging into the deep red mouth that creates the entrance to the exhibition, we enter the 15th century. In the ancient traditions of orthodox icon painting, the colour red signifies the suffering of human nature, martyrdom as well as blood and life. At the same time, red has always been the colour of the kings, and all these meanings can be found in the history of women artists.The exhibits start with magnificently embroidered clerical attire, normally in the collection of the Kremlin museums, dating back from the Middle Ages. In these days the work of women was mainly used to decorate the luxurious robing of church ministers. Using only exquisite materials and a rich image programs, these early examples are of a high value and unique importance. 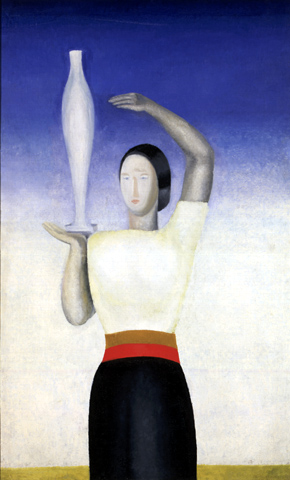 From the old part of Tretyakov Gallery, to show the chronological development of the course history took, are the next exhibits. In the18th century, the times had become less rigid, and the idling aristocrats used their overabundance of time to try themselves in the fine arts.
Especially the female members of the royal family show a perseverance to be noticed.
Maria Fjodorovna Romanova, wife of Pavel I., and her daughters painted a number of still lives, mimicking Dutch ones, and finished some carvings that speak more of the wish to find a convenient pastime by means of art than of a real mastering of the subject. Then, since the second part of the 18th century, professionally trained artists enter the scene. Maria-Louisa Viget-Lebrenne, daughter of a French Classicist painter, is one of the first examples of a renowned paintress of portraits that even got commissions by members of the court of Alexander I. In the upcoming bourgeois age, more and more free private art schools emerged, and now the idling upper classes would not only distract themselves by reading French novels, but also by pouring their emotions into paintings. 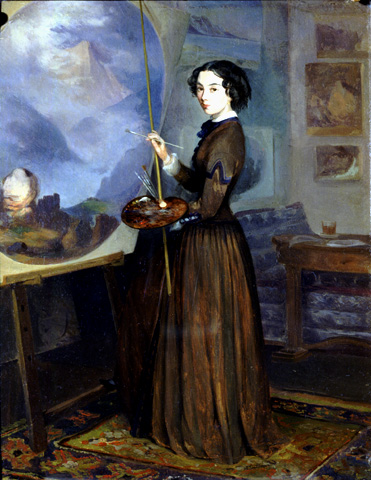 When Suchova-Kolina in 1847 got the first academic gold medal for an Italian landscape, Russia had already known a number of professional paintresses. With these successes, also the female self-esteem rose, as we can see from the change of subjects in women’s paintings: If in the beginning they portrayed themselves together with their children or surrounded bytheir everyday belongings, now free and self-confident self-portraits appear. When women finally could enter the state academies, they soon began to play important roles in the life of the art scene of their times. The Critical Realist Movement in the end of the 19th century, still a merely male new wave of artists from all over Russia, opposed to the soulless academic way of painting, found many followers also amongst the wives of then famous painters and writers who echoed their findings. Good examples are Lagoda-Shishkina or Fjodorova. At the turn of the century stands a remarkable figure: Zinaida Serebrjakova. In an extravagant interpretation of impressionist principles, but without becoming impressionistic as such, she revolutionised the stylistic momentum of neo-classicism. The world-famous painting “At the toilet-table” shows hushed eroticism and self-admiration mingled with intellectuality and spontaneous perceptions.

However, it is only in the dawn of the cubist movement that women find their full place in the artist community. The public opinion nevertheless stays reluctant, and a journalist in 1913 writes about an exhibition by Gontsharova: “It is disgusting that the female sex tries to become artistic. This is disturbing our society’s morality!” Indeed during this time the women turned the vocabulary of painting upside down, and the critics were forced to establish completely new criteria in judging all the cubofuturistic movement. Popova, the founder of this current, together with Ekster, Stepanova and Gontsharova developed the language invented by Tatline, Malevitch and Kandinsky to new heights. These Amazons of the Avant-garde, as they were often called, were also questioning the established rules of life, asking for the rights of women to take the jobs they wanted, or, in the dawn of the first world-war, to become soldiers and fight for their country.
After the time of departure tendencies during the early days of the socialistic revolution followed the long time of repression and state-dictated aesthetics. Nevertheless it is interesting to note how artists became biased between the official art that they had toproduce and the unofficial one they wanted. Thus here in the exhibition a split between the Socialistic Realism and private paintings becomes visible. Where the official propaganda tried to level gender problematics and create a neutral art working for state goals, artists like Zernova or Brie-Bejn would paint tanks and proletarian appearances whereas others like Mavrena-Lebedeva would paint “for interior use only”. For them, of course, gender problematics just were marginal, as they focussed on other views on life.

With time passing, the borders of official art became wider. During the seventies and eighties, the so-called “time of thawing”, it was more or less possible to express oneself more freely. Artists now began to oppose the pompous soviet ceremonial style and also to work on the less attractive sides of life. A good example is the “Self-portrait with daughter” by Egorshina that doesn’t stand in the tradition of academies any more, or the “Composition” by Masterkova, who belonged to the so-called Soviet Underground.

Nowadays, after the end of the Soviet Union, artists are finally free to work as they please. To enter the contemporary part of the exhibition, one has to pass through Nasarenko’s installation “Perechod” (passageway) that transforms the museum corridor into a public subway entrance, complete with the mass of beggars, beer-drinkers and babushkas that are so ubiquitous in contemporary Russian life. A completely different view is offered by the grand-scale photographs “A Harder Life” by Panova, that despite their title only show enormous enlargements of kitchen utensils. A cunning look on recently revived religion is the installation “Annunciation” by Nachova. Using small ventilators to blow up red plastic angels and make breathe a white-clothed statue of the Virgin, she creates a new interpretation of the same picture by Jean Fouquet, changing the focus of the traditional biblical story to a critical look on female perception. Mary is just built of a hollow vessel that has no right to decide if she wants to receive or not, bringing to light the questionable character of a dominantly male religion like the Christian one. Questioning the museum as institution itself are the small photographs without title by Changsler, that only show themselves when touched.

They are covered with a chemical that only turns transparent when warmed up. On the contrary to normal museum practices that don’t allow physical contact with the works of art, this one even demands it – a new way of dealing with the idea of exhibitions itself.

One of the few video installations is “Suspense” by Salachova, a projection of a video of a pregnant woman on the wall, where it intersects with a painting of the same woman. It thus creates a hybrid object between the two media, the traditional as well as the modern one. At the end of the hall, we come not only to the end of the exhibition, but also to an ending in the chronology: Obuchova’s cloth objects “Embroidered Cinema” close the circle to the first objects of art from the 14th century that we saw in the beginning. Using old techniques to illustrate new phenomena, they create objects in between the times, making of the exhibition a palindrome to be read back and forth again and again.