In these cases, “monument-syndrome” and the narcissism of historical conservation seem to move in parallel with a kind of mummification and fetishisation of colonial architecture. As such, culturally positive phenomena such as the recovery and regeneration of the splendid historic centres of many Cuban cities are resolved in an often absurdly theatrical fashion, with results worthy of a Las Vegas street (but lacking the cultural weight of Venturi).

An example of this is the Hotel Telegrafo in Havana, concluded a couple of months ago; the exterior is a cardboard copy – not altogether faithful and featuring the addition of another floor – of the facade of the hotel of the same name which collapsed under the weight of its years and neglect. Or the extremist proposal (already in the design stage however) to partially demolish the current Ministry for Education (a fifties building which adapts itself decorously to the proportions surrounding it), substituting it in part with a replica of the perished convent of Santo Domingo which previously occupied the site. 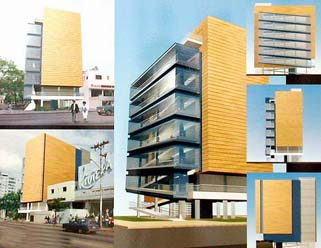 Project for the Grandi Magazzini Riviera a L’Avana, by Cuban architect JoseA. Choy.

Fortunately the debate concerning the central theme of the Biennial – past, present and future of the city – is alive and kicking, even if it remains at an “underground” level and is touched by aesthetic, technological, economic, sociological and political aspects. Above all amongst the young, many are the “hidden talents” bending over backwards to respond to the demands of the market, tourism and foreign investment which whilst they could not be described as cultured are able at least to propose decent designs.

One of these is the architect Jose A. Choy, extremely active on various fronts and part of a group of young architects who are working on the restoration of the Malecen, the famous Havana seafront. Choy is also – along with Julia Leen, Teresa Lues and Oscar Garcea – behind a project to extend the Banco Financiero Internacional, which constitutes a magisterial example of an intervention carried out on an important existing building (a perfect exponent of Havana fifties architecture), without resorting to mimicry but conferring on it a highly personal stamp. The Grupo de Proyecto del Malecen distinguishes itself instead for various residential buildings still at the design stage, partly financed by a number of Comunidad Autonomas Espaeolas, which will go to occupy the numerous lots made available following the necessary demolition of the old ruined buildings. 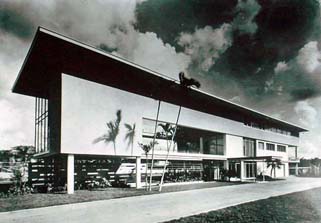 Clear everywhere is an evident attempt to accept without criticism imported models already digested elsewhere, an accessory to which are the (few) specialised magazines from the “primer mundo” in circulation. The most urgent and pressing problem, in this particular context, is without a doubt that relating to national identity, which often gives place to erroneous interpretations of what should be defined as “Cuban architecture”; these themes, often treated “officially” by the particular socio-political establishment which exists, often end up as risky proclamations on what is considered “ideologically correct”.

Reduced therefore to excessive schematisation where the “saber” and the “sabor” end up irreparably confused. In the past, during the years of the International Style, Cuban architects, getting to grips with the rampant modern “rules”, had attempted national redemption in the search and in the recovery of the tectonic principles of colonial architecture, but then the results had been quite different. The effectiveness of these experiments is clearly visible in an interesting photographic exhibition entitled “Cuba, Arquitectura del Siglo XX”, curated by an expert on the subject, Eduardo Lues Rodreguez, in conjunction with the Biennial and on show in the upper halls of the Centro Wifredo Lam.