Film as a form of art is a source for dubious discussions. On one hand, film is the most widely accepted form of art in the modern-day world. On the other, it is the most commercialized form of art. Therefore, many so-called artists hate to admit that film is art.

Many artists, such as Bill Viola and Garry Hill, have used film (and/or video) as a means to create art. Many of these artists have blurred the line between film, video, and art.

In his first U. S. screening, Italian artist Francesco Vezzoli showcases five of his short films at the New Museum in NYC. Vezzoli is an internationally recognized artist, with his participation in the last Venice Biennale.

Upon walking into the gallery, viewers are embraced in red velvet curtains. Between the curtains are circular columns that carry individual screening stations for viewers to enjoy. 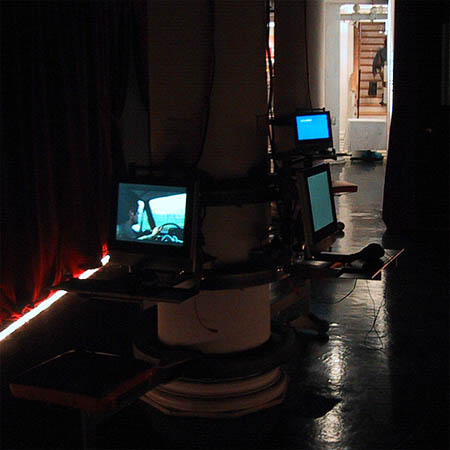 Is film art? And what is art? Brian Eno, the British musician, says: Not to think of art works as objects, but as triggers for experiences. Art is something that happens, it’s an experience, not a quality.

This is probably the most inclusive definition of art I have heard, and it also solves a lot of problems. With this definition, we don’t have to argue whether film is art, or whether performances are art.

While this definition of art clarifies film as an art form, it doesn’t really make film become good art in an art gallery.

Film in a gallery setting like this at the New Museum, in my opinion, is far less successful. Especially when the film piece has a clear beginning and an end (which almost all film pieces have), galleries are less effective as a cinematic setting as gallery viewers randomly walk in and out.

Vezzoli’s films may have won high acclaims in the art field. However, films such as “The City of Lost Children” by French duo Jeunet & Caro, which aren’t considered “art” by art critics, are far better experiences. If an experience is what defines art as Eno defines, then that makes it art. An art gallery isn’t what makes and defines art. It’s the experience that’s created by the work that defines art.

I prefer kicking back on my couch, popping in a DVD disc, and watching a film, rather than sitting uncomfortably in a gallery, trying to decipher the cryptic meaning of some “art” film.