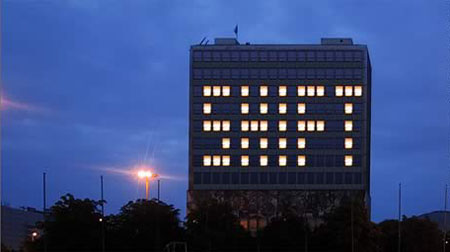 When Berlin was split into East and West, the Alexanderplatz was the eastern central place for shopping and and its radiotower called “Alex” is now the emblem for the dynamically evolving area of the town and Berlin itself. There are serveral cool socialistic buildings whose future is unsure, because of building-speculations in this famous place.

The ChaosComputerClub cares about the chances and risks of technologies like computers and their effects on humans and society. It’s their 10th birthday now and to celebrate it they used one of the buildings at the Alexanderplatz that is called “Haus des Lehrers” (house of the teacher). They installed a lamp in every window and connected them with a computer, so that they can use them as a 18 by 8 pixel screen! This screen now plays funky animations.

The first time i saw it, i was leaving the underground at the alexanderplatz, there was a x-mas-market and a lot of people were busy buying presents and eating sausages. Then i saw a huge eye on that screen, looking from left to right, sometimes pulsating as if it was astonished.

There are a lot of different animations, the range reaches from text messages like fake election results, over falling tetris pieces, funny sports guys to statements like “linux roxx”. But that’s not all. When you call 0190 987654, the Screen will immediately switch to game modus. You can now play giant-pong with your handy as a joystick: pressing 5 means stearing up, 8 is down. Also a second player can join in!

You can also build an animation yourself with a tiny piece of software called “Blinkenpaint”. For example you can animate some hearts for your loved one and have a rendez-vous with him/her at the Alexanderplatz and then activate the animation. Great!